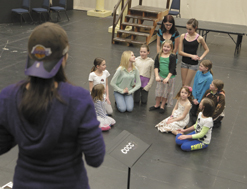 Bend Experimental Art Theater (BEAT) is bringing Gilbert and Sullivans’ witty, fast paced musical, Pirates of Penzance Jr. to the Pickney Center at COCC.  This hysterical and heartwarming show, with fun for all ages, is running from April 19-28. Thirty five of Bend’s best young actors and actresses, ages 7-20, will be performing Pirates of Penzance Jr., directed by veteran BEAT actress Jimena Shepherd who is also the vocal director. Assembling her “Dream Team” of actors, actresses and support staff, “that are so talented and experienced in their field,” will ensure another successful BEAT production.

When asked why she chose this show Shepherd responded, “I fell in love with this show the first time I ever saw it. It is so full of humor and it is bigger than life, but it also has intelligence. The music is just so memorable and lively that you can’t help but be fully engaged.”

Kilpatrick shared some of her tour experiences, “It was one of the most fun shows I was in. I am having just as much fun choreographing it as I had acting in it.

“This is such an ambitious and difficult show, not only vocally but choreography wise, but I don’t have any reservations because everyone has stepped up and is truly doing an amazing job.”

Kilpatrick has used much of the original choreography by Graciella Daniels, but has added a bit of her own style.

Enthusiasm from the student actors is obvious when asked about their involvement on Pirates. Judi Kelley, who plays one of the Ruths says, “Everyone is so talented and even with such a large age range, we all work so well together.”

Quinn Cosby, an actor playing the Sergeant added, “This is a fun, goofy and memorable show that you should bring the whole family to!”

There always a variety of roles for any upcoming young actors and actresses as well as opportunities to explore other aspects of theatre in a BEAT production. Many students have gone on to contribute backstage with costuming, stage-makeup, props, lighting and sound and choreographing. For more information about BEAT, contact BEAT at beatonline.org.