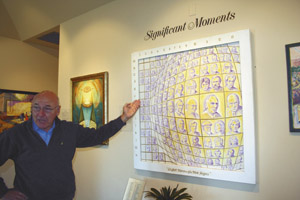 Alfred Dolezal has always questioned the reason for living. He says, “I was never convinced that we are just born, make a living and die…”

Born in Vienna, Austria during World War II, Dolezal has found many of his answers within the stroke of a paint brush. Since buying his first set of oil paints at the age of 23, he has painted 272 works, adorning walls in 36 states and seven countries.

In December 2013, Dolezal and his wife, Patti, opened an art gallery in Eagle Crest Resort near Redmond. The gallery offers an abundance of thought-provoking compositions, whose symbolism and stories are readily translated by Dolezal himself. Upon entrance, he asks visitors if they’d like the “short tour” or the “long tour,” joking that the long tour takes “about two days.”

A wall to wall tapestry of color, the paintings in Dolezal’s gallery are rich with philosophical themes, stories that enthrall the mind and illusions that fool the eye.

The painting entitled In Nomini Dei – in the name of God – depicts two separate cultures praising different gods, symbolized by a black bird and a white bird. Fused into the picture is a portrait of a woman – who Dolezal identifies as his wife. Her face is easy to miss upon first glance, but unmistakable when stepping backward a few feet. Her image seems to represent a unification of the masses.

“Unity is a big word in this gallery,” Dolezal says.

Dolezal’s passion for oneness is exemplified in A Racial Opportunity – a spin on the King of Hearts that illustrates both a Caucasian and an African American king. The pictures rotates at the push of a button, making a full circle so that both kings get their “turn” being upright in the painting. Hiding behind the painting is a quote by Martin Luther King, Jr. that is visible halfway through the picture’s rotation:

“Either we learn to live together in unity as brothers, or we perish as fools apart…”

Another painting featured in Dolezal’s gallery tells a lesser known tale of the infamous Titanic. On one side of the picture is the Titanic herself. On the other, is the fictional ship named the Titan, created by author Morgan Robertson in his novel Futility. In Robertson’s book, the Titan perishes in the sea on her maiden voyage after colliding with an ice berg – an eerie parallel to the Titanic’s fate 14 years later. The ships are separated by the Titanic’s Grand Staircase, with the glass dome looming overhead. Dolezal calls it The Creation of Reality.

Over a span of 60 years, Dolezal’s relationship with art has answered a plethora of life’s questions, creating a reality comparable to a work of art.