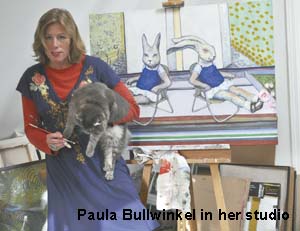 Drawing from mythology, art history ancient cultures, Paula Bullwinkel creates visual narratives as her personal form of self expression. As an artist with a background in fashion photography, Bullwinkel is an expert at “staged storytelling” aims to give the viewer just enough information to create their own narratives.

The stirrings of Bullwinkel’s artistic career began during her time at UC Berkley. Majoring in English literature, she dabbled in art classes during her studies. However, the real inspiration came from her roommate, an art photographer who worked with large prints. A move to the east coast after college prompted her to start taking photos.

“I was a self taught photographer in New York I got jobs assisting photographers. Fashion sparked my interest; it was the same as art photography in my mind. I liked the narrative: heroines with a story,” said Bullwinkel, who comes from an artistic family is the daughter of Bend artist Ann Bullwinkel.

When she decided to transition to becoming a photographer in her own right, she found her best asset to be persistence. A chance meeting with Andy Warhol on the street gave her the first break, as a Californian in New York, she found people responded positivity to her approachability, c or determination to work in fashion photography.

Moving to London launched her career as a photographer. “Americans had a certain cachet in Engl , we were interesting,” she said. “I worked for Elle, Vogue, GQ, Face ID magazines I was always treated as an artist.”

Then came the late ‘80s. Recession hit Bullwinkel found herself back in New York wanting something more. “I began to change. I wanted a family not have to work seven days a week to be only as good as my last job.”

When her daughter was born 11 years ago, she began painting. “I started when she was a week old – her in one arm a paint brush in the other. It took me by storm I thought, this is it,” said Bullwinkel.

“With photography I had to be reliant on models, lighting equipment. Painting comes out of the head. The narrative heroine adventure movement can come out more with more freedom more challenge.

“Painting is not as easy as photography. You have to have an idea the technical skill vision. The photo is an accessible medium to anyone with a camera.”

Bullwinkel believes in approaching the canvas with a vision is driven to create something original when she puts paint on canvas. “It can be pure hell!” she said. “It is so engrossing to let it evolve get it out. It takes time. Especially because I’m not painting to sell, I’m painting for myself.”

Because she is a mother of two has started her own art school (see article in September Cascade A&E), flexibility is necessary when finding time to paint. She tries to devote at least ten hours a week to painting will develop up to five or six canvases at a time.

Looking back at her earlier work, she now sees fashion photography as manipulative trite, but the elements of fantasy imagination have carried over to her present work.

Bullwinkel’s literary background has proved to be a rich source of material. “My inspiration comes from mythology, fairy tales ancient cultures. A fairy tale is a raw form of problem to solve. There is conflict triumph, it reflects how I think visually. I apply this in my art to people I know, or stories from my own childhood,” she said.

“The images are like single frames from lost films, or crystallized moments from otherwise vague memories. I paint heroines ( heroes) who are balancing the potential of wonder joy, the control power that comes with that potential, with a sense of conflict uncertainty. My paintings show the beginning of their underst ing connection.

“The conflict comes from social relationships, the unknown, /or fear. The plot is not always clear to the people in my artworks, but the necessity for vigilance, readiness to act, even a willingness to laugh is essential. The hybrid character is perhaps a way to connect with the inherent nobility of animals, a reference to ancient traditions.”

Her art school, INTO ART: Learn Art with An Artist, launched this fall. A new concept in art education, Bullwinkel is teaching children by example fully believes kids can benefit from a progressive education that shows the whole picture: art history, art criticism, art aesthetics art making. Adults wouldn’t take an art class from a teacher who wasn’t an artist; she believes the same holds true for children.

When talking about goals, Bullwinkel mentions she would love to have a regular position as an art teacher in town, cultivate a broader public for her art. That could look like a gallery in Portl or similar large urban area. “My art is different from the area, there isn’t a lot of figurative work in Central Oregon or Portl . I need to be patient, look to urban areas keep doing what I am doing,” she said.

Bullwinkel’s art is hanging in Bend at Sparrow Bakery, Bright Place Gallery TBD until the end of November, in Eugene at the Jordan Schnitzer Museum as part of the group show, Beyond the Demos VI: Oregon Artists Who Teach, running until January 30.