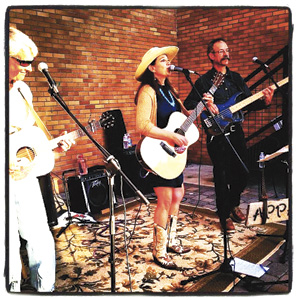 In the spring of 2011 and after they both retired from their careers, Eli Ashley said, “I think we’re going to play music now.”

And his wife, Dottie, replied skeptically, “We are?” A couple of months later he came home with their pickup loaded with used gear: electric amps, guitars and microphones.

She figured he was serious. They started  practicing, took guitar lessons (they played in high school…it’s been a long time) and she took drum lessons from Dale Largent because, in the beginning, they leaned toward being a rock and roll band.

Soon, however, Eli figured out that they wanted to be a trio and  needed a bass player and found Steve Jensen playing out one night.  The rest is music history.

Appaloosa finds their sound based in the Americana and folk music all around. Dottie and Eli write and perform their original tunes and the band plays covers from the country/blues/folk music of the ’60s and ’70s. This is an enthusiastic, entertaining band with great music, lots of stories and toe-tapping fun. They’re named after Eli’s horse Dakota, the spotted mascot for the band.

2014 was filled with music: MOTH/Sisters Folk Festival, The Patio/North Soles Footwear, Bend Farmers Market, the West side Pharmacy Grand Opening, First Fridays and a bunch of private parties. Their November trip for their Nashville gig (at the Omni) was tied for the highlight of the year with the CD they recorded at Largent Recording Studios in December/January.

2015 showcased Appaloosa at the Tower Theatre (First Friday) and KPOV’s Center Stage program in January and  they were invited to perform in a super fun wedding at the Hollinshed Barn in February. Their debut CD release party will be on March 20 at the Faith Hope and Charity Vineyards and Event Center. Upcoming performances are listed on their Appaloosa FB Page: https://www.facebook.com/appaloosa.trio.music

Appaloosa is so excited to be performing in such a spectacular venue. $5 cover, CDs ($10) for sale and great food and superb wine available in a beautiful setting.