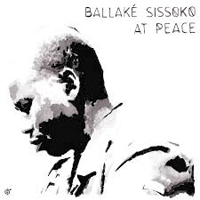 The wonderfully melodic and meditative album, At Peace, is the second studio venture by Malian musician Ballake Sissoko and French cellist Vincent Segal. The pair teamed up two years ago after a chance meeting and produced their first album, Chamber Music.

Sissoko plays the traditional West African 21-string harp called the kora, and his Mailian roots are based in the traditions of the griot, or a generational passing of the art of a wandering historian, musician, poet and praise singer. The contrasting cello played by Segal provides an interwoven sound of quiet beauty that remains evocative of the baked earth and dusty horizons of West Africa.

Once a member of the French National Orchestra cello section and trained in Western classical music, Segal uses his mastery of the strings to evoke innovative sounds, sounds that could almost have their home in the distant African continent.

Maimouna, the opening track on At Peace, is what initially drew me into the labyrinth of sounds found on the album. The layers of stringed instruments weave in and around the central melody, and at times the sound takes a playful variation.

The tracks on At Peace aren’t overtly African in nature, but I have to admit, some of the appeal of the album was the hint of the West African sound. Songs N’tomikorobougou, Kalanso and Kabou in particular brought me back to shaded courtyards and hot, dusty afternoons I experienced while living in the continent as a Peace Corps volunteer years ago.

The wonderful and novel appeal of At Peace is the crossing of genres, the compatibility of sounds and the new images they invoke. It could provide a soundtrack for your quiet morning cup of coffee, or better yet, play the album while you are planning your next vacation, you may end up somewhere entirely new.