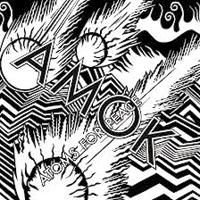 Radiohead’s side project, Atoms for Peace, is an experimental rock and electronic group which released their new album, Amok, in February. The group was formed in late 2009, but was nameless for quite some time, often being referred to as simply Thom Yorke’s band (lead vocalist, head songwriter, guitarist and pianist for Radiohead).

However, Yorke is not the only big name behind this band. Radiohead producer Nigel Godrich, Red Hot Chili Peppers bassist Flea, drummer Joey Waronker and percussionist Mauro Refosco all play their part in creating this band’s pumping and restless energy.

Sophisticated rhythms and unique sounds tend to be what every band strives for in their quest for musical championship, although I believe that few pull it off as effectively as Atoms for Peace. The group truly has a sound all its own, with the exception of Radiohead (of course), due to the fact that it attempts to blur the line between digital and analogue sound.

Yet, the main thing that makes Amok such a powerful album is its ability to distinctly push forward and drive listeners into a sometimes trance like cruise. Each song has a progressive beat that is easy to dance along with or just jam out to. This is appropriate, as one quick Google search will reveal just how much Thom Yorke loves to rock out to and dance along with his creations, whether it be on stage or in a popular music video.

Overall, Amok still carries the proverbial Radiohead torch in that it continues to showcase unpredictable evolutions and inventiveness throughout each song. I would highly recommend checking out this great collection of songs, as they just might be the thing that motivates you to get up and get things done, while also encouraging your imagination in new ways. If you’re looking to have a good time and tend to enjoy electronic music on one level or another, it would be hard to go wrong with this album.