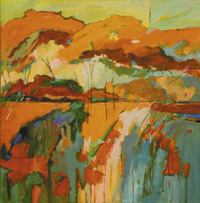 Questioning the Conventional Wisdom of Color

Local artist Carla Spence says her current work focuses on landscapes in unnatural colors and semi abstract shapes, creating a combination which pushes viewers to look at the world around them in new ways.

“This new way of seeing began for me eight years ago, when I lost my vision in one eye,” she explains. “Ironically, this became an enlightening experience.  As I came to terms with the visual distortions of my sight, I began stockpiling images, memories and experiences. I was privileged to have a leisurely two-year stint in Italy, soaking up art and landscape images. Frequent travels to the American Southwest, Australia and Atelier study in Montreal contributed to the beginning of a process of painting abstractly. I developed a new found freedom to improvise and experiment, to push limits and “break the rules”, without severing links to reality.”

Now Spence’s paintings are more than about beauty.  “I am communicating an idea, a visual memory, as I explore what happens when significant moments over a long period of time become incorporated into the fabric of my life.  In real life, I am constantly preoccupied with the color and shape of things, of landscapes, of details in larger pictures, which call to be altered, to be represented in unexpected ways.”
The intensity of light in the American West has heightened Spence’s color palette and intensified her interest in dualities/opposites which are rich, but often stark color combinations.  “I do not attempt to represent the outward appearance of vast landscapes, but rather the impact of color, texture and shapes.  I move from the known and observable forms to the intangible.”

For many years, her work as a teacher and then as a corporate designer was rigidly representational, influenced by her father, a Bauhaus architect.  “I grew up under his drawing board and artistic interests, first in Holland, and then Australia,” Spence continues.  “That results in the use of geometric restraints to hold my intuitive work together. Prior to moving to Bend four years ago, I was influenced and encouraged by the rich art community in Houston, Texas.”