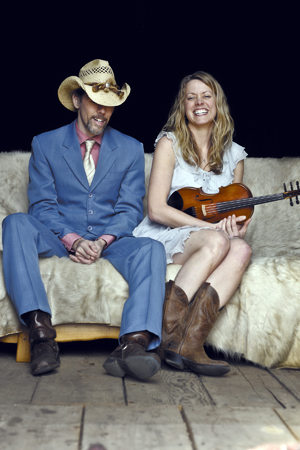 Jonathan Byrd and Chris Kokesh, aka The Barn Birds will perform a concert at The Barn, located at 68467 Three Creeks Road in Sisters on Wednesday, April 25, 7pm.

Byrd and Kokesh met in Sisters in 2007, at the Americana Song Academy, a week-long songwriting school. Enamored with Chris’s fiddle playing and harmony singing, Jonathan invited her to play with him at the Sisters Folk Festival that weekend. They played two encores, and the festival audience voted them the Encore Performer to return the following year. The duo toured the Pacific Northwest and Midwest and came back to Sisters to make their first recordings and press photos in The Barn. “It was a homecoming,” says Byrd. “This duo was born here.”

Jonathan and Chris had to stop recording when the birds in the walls of the barn would erupt in song. They dubbed themselves the Barn Birds. Next Wednesday, The Barn Birds will play their first show in The Barn where the name was born.

Byrd is a preacher’s son, a Gulf War Navy veteran, and a seventh generation North Carolinian whose songs you likely have heard, even if you haven’t heard Byrd sing them. The Chicago Tribune called him “one of the top 50 songwriters of the last 50 years.” The Boston Globe gushed, “This rootsy North Carolinian…displays John Prine’s gift for stark little songs that tell big, complex stories, Guy Clark’s lean melodicism, Lyle Lovett’s wry mischief, and Bill Morrissey’s knack for the revealing image.”

Kokesh is no newcomer to the folk music scene. In her 14 years with the all-woman quartet Misty River, she became a veteran of festival stages and helped create the signature vocal blend of this Northwest favorite. In July 2010, October Valentine debuted on the Folk DJ charts at #20, and Chris’s stunning songwriting, crystalline vocals, tasty fiddle and solid guitar distinguish her as a stand-alone talent. Onstage Kokesh reveals the inner workings of her heart with grace and an unexpectedly wry sense of humor. Jeff Douglas or Oregon Public Broadcasting says, “Chris Kokesh is writing songs that stand up with the best. Keep an ear out for this emerging talent.”

Doors open at 6:30, no advanced tickets. Suggested donation is $15. Bring your own beverage and food if you wish.