Deciding which movies will make a splash during the BendFilm each year can be a daunting task, if only for the sheer numbers of films which apply. For the 82 official selections in this year’s line-up, the BendFilm selection

“We use Withoutabox.com, an industry-wide submission program for filmmakers,” explained Festival Director Orit Schwartz. “We get the majority of submissions for BendFilm through that base, but I also look for films, know filmmakers or go to other film festivals.

“Withoutabox is an amazing system that started about a decade ago. It’s become almost too easy to submit your film to a festival,” she said. Interested filmmakers fill out one form online and then can choose to submit among the thousands of festivals Withoutabox manages.”

To keep the films current and exciting, BendFilm has specific submission guidelines. A film needs to be a Central Oregon premier, meaning it can’t have been theatrically released before in the area. In addition it needs to have been produced and released within the last year. “We try not to program anything that you could stream online,” Schwartz explained. “Now a days it’s such a different [business] model, films go on video-on-demand before they show up in movie theaters.”

To be an independent film, the production must have been produced outside the big movie studios; many have a much smaller budget than a studio production and will be distributed by an  independent company as well. Independent films can often be a way for filmmakers to explore their artistic vision and less mainstream subject matter.

Traditionally to screen the films, BendFilm would collect hundreds of DVDs, but just like the submission process which has been streamlined through the power of the internet, in the past few years more and more filmmakers have been moving to digital uploads, which can save a lot of time and money. “It’s much easier to just send a link now,” Schwartz said.

Links and DVDs all add up to thousands of hours of viewing, and thanks to the 35 selections committee members, all the films can be vetted and scored in a timely manner. The viewers are assigned to a category (narratives, documentaries, shorts, student shorts), and as they watch, will score the films on a 1-100 scale.

“The instructions I give them include: if you were to go see a movie, would you recommend it to your friend? Do you like it? Do you think it is good quality?” The viewers act as a segment of the BendFilm audience, with many returning year after year. “We try to get a good demographic [of screeners]. You may be watching a ton of films in a row, some will be great, but you will see some movies that aren’t very good.”

“The true reward in the process itself was watching all those films,” said Rachel Miller, a first time screener of documentaries. “There was so much talent, and I was one of the few people who go 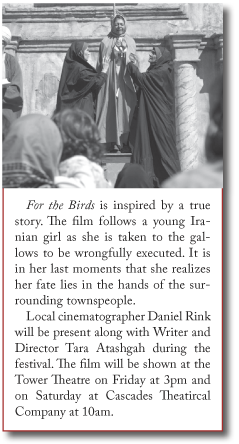 t to see all those films, including some that might not have made it into the festival.”

Over three months, she screened 55 films. “I love watching documentaries and even when the process was over I was having withdraws not being able to go home and have cool films to watch.”

Once Miller and the screeners turned in their scores, Schwartz kept the tallies in a spreadsheet until it was time to decide which films to invite to the festival. “The number of films chosen for an official slot each year has ebbed and flowed, but the 82 official selections this year is just about right,” she said.

The downside to receiving so many submissions are the hundreds of rejections Schwartz and her team send out. “The movie may be awesome but sometimes we just don’t have room…We want the programming to reach a wide audience, and one of the pieces of feedback I give is that we only have so many slots. [First] it has to be a great film, but we can’t run 17 snowboarding movies, we have to pick the ones that we think would work the best.”

Once the movies are chosen, the puzzle of scheduling them into four-day festival begins. “I try to rotate each movie in twice through so people have a couple

of opportunities to catch the films,” Schwartz said. “Scheduling is like a Sudoku puzzle.”

BendFilm will have seven venues this year, some which hold hundreds of seats like the Tower Theatre, and some very intimate locations like the Tin Pan Theater with 28 seats. “We have some pretty rad films at the smaller venues,” Schwartz said. “It’s really about rotating each film as fairly as possible to get fair showings.”

The program will begin Thursday evening, October 10, and continue the next three days with films showing from mid -morning until late-night. “With a film festival, there is never a day time, you are just here to watch movies,” she said. Saturday evening will be the awards ceremony, and Sunday’s programming will include the “Best Of” films that won awards the night before.

Over half the films will be represented by filmmakers, writers, directors and actors coming from all over the United States. Many come to the festival to take part in question and answer sessions and special film panels.

“I am wowed about everything this year…honestly we are really excited about our selections of films and excited that these filmmakers are making such great films and attending the festival,” Schwartz finished.