With a wide variety of mediums between them Linda Heisserman’s medium is porcelain clay, Gabrielle Taylor’s art combines .999 Fine Silver and gemstones and Shelly Wierzba focuses on oil painting. 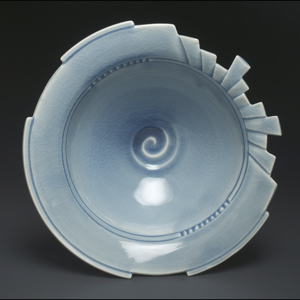 Heisserman fell in love with clay when she took a course in college and so changed her major to art, trying glass blowing, weaving and jewelry making, but always returning to clay. Her mentors and teachers were Jack Earle and Tom Kerrigan at Virginia Commonwealth University.  She said her love of clay is for the tactile, she loves how it moves and feels in her hands.

She can start working with it when it is soft and pliable and it still speaks to her when it becomes dry and fragile. Then it changes again when fire is introduced. She is inspired to make objects that are both functional and special, for both herself and the potential buyer. Heisserman also likes to develop forms to carve on. Once she throws the clay on the wheel, it goes thru a short drying process so she can then turn it over to trim the foot into the piece. It must then dry to leather hard which is the best carving medium. Often it takes her four to five hours to carve an intricate piece. The work is then fired in an electric kiln for the first firing which is called bisqued fired.  After being bisqued fired it is the consistency of a red clay flower pot, porous and yet it can stand getting wet.

At this stage, she will dip the piece into a liquid glaze and put it on a shelf to dry for a day. She is usually working on many pieces during this time and when they are all glazed she will put them in a large gas kiln and fire them for 14 hours until they reached what is called cone 9 1/2. She states that the hardest part of making her craft is selling it; she does not love the selling process but is happy to see people enjoying a piece of her art.

As far as where her art is going, Heisserman says she doesn’t know. Her dream project is to be accepted by the Strictly Functional Show, a year long traveling show. She has been accepted in past years into Art in the Pearl in Portland and Art in the High Desert and was a founding member of Clay Guild of the Cascades. When asked what is the one thing we will never find her doing she replied, “Never say never is one of my sayings, having said that, you probably won’t find me driving a dirt bike, motorcycle or snowmobile.” 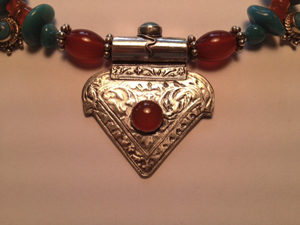 Gabrielle Taylor works in .999 Fine Silver and gemstones having learned silver work from a friend. She continues to gain knowledge via her membership in the Central Oregon Metal Arts Guild. Taylor’s inspiration comes from anything with texture or form, from fabrics to nature. The most fun part of her art is when she adds the gemstones. She begins her process when the silver is a powder which is then combined with a clay base. This clay base holds the shape while she rolls, creates texture, carves and forms the silver piece. Then it is fired in a kiln to burn off the clay base, which leaves 99.9 % pure silver.

After firing she refines the piece with more sanding, tumbling, polishing and burnishing. Some pieces get antiqued with liver of sulphur and some then have gemstones mounted. The biggest challenge in making her creations is coming up with new designs, since she only makes one of each item. She states that to date, she has made over 1,400 unique pieces. For her upcoming show at Red Chair Gallery she has recently purchased several Afghan silver molds, and has been working on a collection made from them. She also purchased wonderful stones in Tucson this year and is waiting for them to tell her how to mount them.

Taylor is increasingly moving towards larger art pieces with more silver and her dream project would be an entire necklace with integrated large links. Not only is a lot of silver involved, but the links need to be linked before firing, making it an extremely delicate operation. 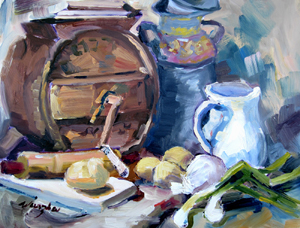 Shelly Wierzba’s art is multi media with a focus on oils. She is generally self taught but has studied with several nationally known artists, including Arnie Westerman, Alex Powers and Eric Wiegardt.  Wierzba ‘s mother was a popular artist in the San Francisco Bay area, which meant Shelly spent many an evening doing her homework at the Palo Alto Art Club where her mother was a member.

Wierzba thinks her mother was responsible for developing her eye for good composition and design. She painted in watercolor for many years and still loves the medium, but now prefers oils and the creaminess of the paint as well as the control of drying time. She loves the challenge of creating her art, both in the studio and on location. She often paints on location, en plein air, inviting her husband, an avid fly fisherman, to accompany her. She likes to be open to the sounds and smells around her which are essential for understanding the mood or feeling she is trying to capture in a painting. Her primary goal in painting is to express a sense of time and place, she  would rather suggest a detail than focus on it.

Wierzba feels she is successful when there is room for the viewer to insert his or her imagination and feelings into the painting rather than have the whole story immediately apparent. She hopes to lead the viewer on a journey filled with emotion and thought. Shelly is hoping to produce more landscapes and figure paintings that are looser in style and more expressive in a “painterly” fashion in the future. She would like to continue on the focused path that she has been on, becoming more and more expressive in her work. She enjoys painting very large and would like to be able to capture a figure or scene on a large scale and have it be as fresh as her smaller works.