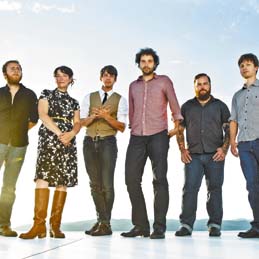 The NorthWest Crossing Hullabaloo, a Bend street festival set for June 28, is kicking off summer in style with this American indie folk band.

Bind Pilot is based in Portland and made its network television debut on The Ellen Show earlier this year as one of her favorite bands. Their debut album from 2008, 3 Rounds and a Sound, reached 13 on the Billboard Top Digital Albums chart.

Blind Pilot, which is known for such tunes as Go On, Say It and Story I Heard, released their second album We Are The Tide in 2011. The band gained attention in 2008 when they went on a self-produced bicycle tour of the West Coast to promote their first album, and later when they opened for the Decemberists and made some large festival appearances, such as last year’s Lollapalooza in Chicago.

Their act will begin at around 8:30pm on June 28 at the NorthWest Crossing Hullabaloo, preceded by several other local and regional musical acts.

The uproarious street festival, which is in its sixth year, regularly features bike races (including a kid’s crit), live music, street performers and family activities. The next day, June 29, is the kick-off of the popular NorthWest Crossing Farmers Market, which will run every Saturday from 10am to 2pm through September 21.