February 15, 1964, News In Brief put it this way: “There are rumors abound that the [Beatles] are Britain’s revenge for the Boston Tea Party.” 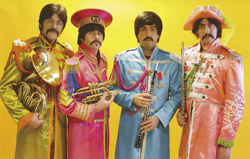 In mid-December 1964, I Want to Hold Your Hand began playing on U.S. radio stations. When the Fab Four played The Ed Sullivan Show two months later, captivating 60 percent of the American viewing audience, the British Invasion had officially begun. Before you could say “Yeah, Yeah, Yeah!” Beatlemania swept the country.

The world’s first boy band acted adorably goofy and good-natured in their radio and television interviews, especially during the first wave of Beatlemania. They also dropped the “roll” from rock ’n’ roll and replaced it with “pop,” combining for the first time rock and popular music in a unique fashion without losing rock’s primal, driving sound.

The Beatles were quickly followed by The Rolling Stones, who were perceived by the American public as a much more ‘edgy’ and even dangerous band. This image distinguished them from the Beatles, who had become more acceptable and parent-friendly. The Rolling Stones appealed more to an ‘outsider’ demographic and popularized, for young people at least, the rhythm and blues genre. The Rolling Stones would become the biggest band other than The Beatles to come out of the British Invasion.

The British Invasion was one of the watershed developments in American popular music history and is credited with inspiring the free speech movement and countless other social changes. During this year’s 50th anniversary of the British Invasion, this raises a question which has fueled arguments since both bands were covering Chuck Berry songs. Who’s better? The Beatles or the Rolling Stones?

On Friday, October 24, Tower Theatre in Bend will host Beatles vs. Stones – A Musical Shoot Out with these two legendary bands engaging in an on-stage duel courtesy of renowned tribute bands Abbey Road and Jumping Jack Flash. The show consists of six alternating mini sets with both bands coming together on stage for an encore. 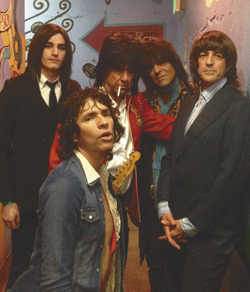 Fans must choose between Sir Mick Jagger leading the Stones through bluesy, soul rock or the Beatles trawling through their catalog of classics.

Since 2011, Abbey Road and Jumping Jack Flash have been going head-to-head across the Western United States in casinos, clubs and performing arts centers. The show performed a three month residency earlier this year at the Harrah’s Reno showroom. The next stop is Harrah’s Laughlin for a long residency. The show in Bend is part of a 110 show tour of the U.S., Puerto Rico, Canada and Mexico.

The band members exchange tongue-in-cheek barbs about the rivalry between the bad boys of London and the lads from Liverpool.

“In fact, the Beatles and the Stones were fast friends,” said Young Hutchison, who plays “Keith Richards” in the show. “But if you were a 60’s kid, you had to be one or other – not both.”

“It was Mick Jagger who inducted the Beatles into the Rock and Roll Hall of Fame,” said Chris Paul Overall, who plays Paul.

Abbey Road promises a 30-song, hit-packed chronological set, opening with I Want To Hold Your Hand and the Beatlemania years, to Sgt. Pepper’s Lonely Hearts Club band, before building through the band’s “flower power” period.

Jumping Jack Flash will perform three crowd-pleasing sets guaranteed to get even Beatles fans on their dancing.