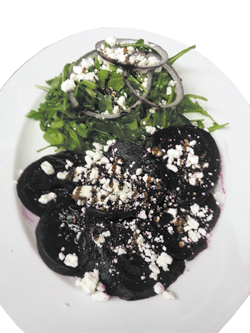 by LINDEN GROSS for Cascade A&E

Things are changing so quickly at Pine Tavern that the servers can barely keep up:

New owner—Bill McCormick, co-founder of the McCormick & Schmick’s, a national chain of seafood restaurants, and the former owner of Jake’s Famous Crawfish restaurant in Portland.

New décor—remodel features include five intimate dinner nooks with curtains that can be drawn.

For decades Pine Tavern wasn’t just the place to dine in Bend, it was almost the only place to dine if you wanted to treat yourself. Over the years, each changing of the guard has brought something new and exciting to the table. This latest change in ownership (just the fourth since the restaurant was established in 1936) promises just that.

The bar was almost full when I arrived at 5pm. By the time my friends and I headed into dinner a little over an hour later, the dining room was packed as well. We settled into our window-side table overlooking Mirror Pond and after much scrutiny of the new menu managed to agree on three appetizers and two salads.

The grilled half an artichoke served with melted butter was sensational, with the smoky flavor elevating a somewhat bland vegetable to a sublime new level. I’d suggest ordering one for every two people—or not sharing at all. The accompanying arugula salad with a wonderfully tart lemon-pepper vinaigrette provided the perfect palate cleanser.

I was delighted to find the same salad accompanying two large Dungeness crab cakes. I was less thrilled with the crab cakes themselves, which could have been crispier. And while they were fresh as could be, we all found them under-seasoned and agreed that a little more onion or shallot would help. 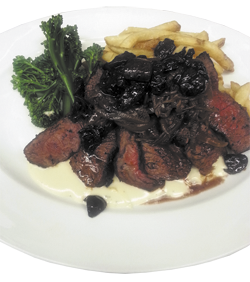 I had no quibbles with the Cajun Shrimp & Grits which were perfect. The shrimp piled atop the grits in a lovely presentation which included leeks, bell pepper, garlic, shallots and onions (so that’s where they went) were plump, tender and super flavorful. Comfort food goes seaside. Yum.

Both salads were tasty. The Caesar could have used a smidge more dressing and a more even-handed toss, so the nod and eight thumbs up went to the Arugula and Roasted Beet Salad with goat cheese, red onion and balsamic vinaigrette.

When it came time to think about our next course, we eyed the impressive entrée salads before settling on our selections—a mix of Pine Tavern Classics, Seafood Entrees and Chef’s Specials. The Lobster Scampi with tomatoes, garlic and shallots in a white wine butter sauce was as deliciously decadent as it sounds. The linguini it was served on, however, tasted too strongly of lemon. A lighter hand on that front would provide a bright note without overpowering the star of the dish. The duck breast needed less time in a hotter pan, which would have resulted in a better sear and rarer, juicier slices of duck. But the balsamic reduction sauce was the perfect foil, and even our non-duck lover liked the dish.

Two of our entrees were hands-down winners. The 16-oz. Bone-in Ribeye topped with blue cheese compound butter, which after much debate we had selected over the prime rib, was ridiculously good. I can’t remember who announced that it was one of the best rib-eyes she’d ever eaten. I was too busy diving in for another bite.

The Blackened Thresher Shark was equally wonderful, especially because we asked for a side of beurre blanc, my favorite butter sauce for fish, in addition to the mango chutney the shark came with. “It’s intoxicating with the beurre blanc,” announced Deb. I’d have the shark again tonight if I could, but unfortunately we didn’t leave a single bite so no leftovers.

By the time we got to dessert, they had run out of two of our top choices—the house-made scone bread pudding served with Irish Whiskey Sauce and the Mixed Berry Cobbler. We consoled ourselves with the Sky High Mud Pie (oh yea) and the old-school Strawberry Shortcake which one of my friends announced was like “a warm hug from Grandma.” Our hands-down favorite, however, was the silky, creamy, eggy and utterly lovely classic Vanilla Crème Brulle. It just doesn’t get any better than that.

Yup, it’s true. The more things change, the more they stay the same.