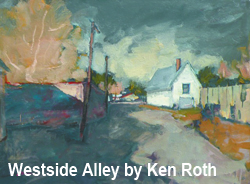 City Walls at City Hall will unveil a special invitational exhibition of the members of the Bend Gallery Association in honor of two decades of art in Bend, Oregon. The show will be unveiled at a public reception on Thursday, October 9, 5-7pm at City Hall, 710 NW Wall Street. The show will remain on display through January 2015.

The Bend Gallery Association is celebrating 20 years of existence as a visual arts organization composed of art galleries and organizations in Bend. The BGA started in the mid-90s by Sandra Miller of Sunbird Gallery and Pamela Claflin of the Mockingbird Gallery, along with Karen Bandy with the support of Pamela Hulse Andrews of Cascade A&E.

It was a way to bring patrons together every First Friday to see and appreciate art in a festive atmosphere. Thus, began the First Friday Art Walks in downtown Bend which have spread to the Old Mill District and beyond. These well-attended gatherings were started through the grassroots efforts of the art galleries and have continued to become a favorite activity in Bend.

City Walls at City Hall is an arts initiative of the City of Bend Arts, Beautification & Culture Commission continuing to make a difference by inspiring the community through art.

www.bendoregon.gov/abc.
Bend Gallery Association, Karen Bandy, one of the original founding members and longest standing member at Karen@karenbandy.com or 541-388-0155.