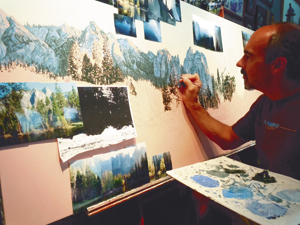 Rise and shine as dawn breaks for a choice spot in line during the 11th annual Clearwater Gallery and Framing print giveaway on Saturday, October 12. Artist and gallery owner Dan Rickards is especially excited about this year’s edition, available to the first lucky 150 persons, as it marks the beginning of an inspired series of National Park paintings.

“The first painting for the free print giveaway will be of Yosemite National Park and is the debut work in this new series,” he said from his home studio, surrounded by a fantastic collection of vintage toys and games. “I grew up in Lake Tahoe and it was the most kindred force forming my first interests in the backcountry and feeling what the outdoors was truly like, with the desolation wilderness and its surrounding streams and rivers. That’s why Yosemite was my first choice. I love the granite rock and the vegetation diversity. We went and visited the park in the beginning part of May and spent our time on the valley floor and the mariposa grove.”

After 10 years, Rickards has now retired the Central Oregon paintings for his annual print giveaway, moving on to a new artistic chapter.

“As a career goal I’m going to try and paint all the National Parks, aiming at two or three a year. I’ll be creating some editions that will actually give back to the parks themselves, and another edition to reward the unsung volunteers who donate their time and efforts to help build trails and improve the parks, from guest rangers to garbage collectors.”

This marks the only time where the original source painting won’t be for sale, allowing Rickards to retain the artworks for a future exhibit. One of his highest hopes is to generate renewed interest in our National Parks with the younger generations through the magic of art.

Going forward, each painting will be unique in size, shape and composition to reflect the individual nature of each National Park.

“I want to paint something that people recognize as that specific park without duplication of those same familiar landmarks and look for more intriguing perspectives, like the moment you get out of the car and experience your first breathtaking glimpses of the park.”

This incredible giveaway of a limited-edition, signed and numbered lithograph started back in 2002 and has art fans and friends driving from all points in Central Oregon, some clad in pajamas, others in scarves or raincoats, for the chance to get of one of Rickard’s stunning prints. For many, it’s an annual tradition to be fortunate enough to be awarded one of the artworks and a fun occasion to meet the artist and celebrate creativity and nature with one of Central Oregon’s most talented artists.

“Although we’ve moved locations it’s so nice to have the support,” he said. “It’s very humbling to see the people come out and wait in line. There’s some people we only see during the print giveaway, so it’s been a really fun tradition. Yosemite commands great respect and attention and it’s very exciting to be moving in this new direction.”

Clearwater Gallery and Framing, 303 West Hood Avenue, Sisters. The free poster event will be held during the first morning of the Sisters Harvest Faire on Saturday, October 12 at 10am. www.theclearwatergallery.com, 541-549-4994.