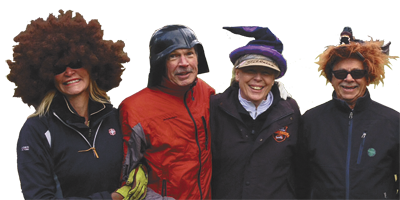 How we celebrate says a lot about our culture and our willingness to embrace the new, the different and the talented. Central Oregon is abundant in doing just that by embracing numerous festivals from music, film and literary throughout the year. These forms of celebration and acknowledgement of creative forms are spiritual in their nature.

In September I attended the ever remarkable Sisters Folk Festival, without a doubt one of the absolute best music festivals I’ve attended…and it’s right here in Central Oregon. For the neophytes to this festival, this is not just folk music, you’ll be completely surprised at the gifted musicians supporting a variety of genres including my favorites Baskery (three drop dead gorgeous sisters from Sweden energetically performing blues/southern rock), Grammy-nominated John Fullbright (from the heart of Oklahoma, top of the charts in Americana, pop and rock) and The California Honeydrops (blues and R&B American band punctuated by trumpet, piano riffs and bluesy vocals). Thank you Festival Director Brad Tisdell.

October brings the annual BendFilm: remarkable and thought provoking films, filmmakers, directors, actors and producers from all over the world. More than 100 film people from all parts of the globe attended this year’s festival. The Festival’s 10th year garnered a 25 percent increase in box office attendance and provided independent filmmakers with awards nearing $70,000. I can’t say it any better than Neal Block, head of distribution for Magnolia Pictures, “The combination of Bend’s physical beauty, the strength of the program and the participation and support of the community made it a really special weekend and a special festival.” Thank you Festival Director Orit Schwartz.

November opens with The Nature of Words literary festival. As each Nature of Words has brought us words to live by and inspired us to write, listen and learn, this festival, set for November 6-10, is sure to stir your enthusiasm. Guest authors who will unveil their unique and intellectual manifestations include Lawson Inada (former Oregon Poet Laureate), Karen Finneyfrock (young adult novelist, The Sweet Revenge of Celia Door), James Prosek (artist, writer and naturalist with new book Ocean Fishes), Jim Lynch (author of three novels set in Western Washington) and Emily Carr (a poet and finalist in seven national book contests). The Festival is full of rhetorical pleasures and illustrative rhythms. Thank you founder Ellen Waterston and now Festival Director Amy Mentuck for carrying forward the tradition.

Check out the Cascade AE website and APP so you don’t miss these incredible celebrations of art.

Consider this: if you haven’t had the urge to sing and dance lately or watched, read or listened in real time to something new and extraordinary then set out on a new direction: to binge on the pure pleasures of the high desert festivals.