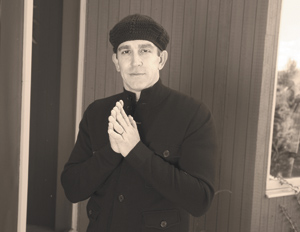 As part of its King, Gandhi, Chavez and Mankiller Season of Nonviolence, Central Oregon Community College is helping to sponsor two presentations by Richard Blanco, an acclaimed Cuban-American poet, on Tuesday, January 27, in Wille Hall in the Campus Center on the Bend Campus. The event is free and open to the public.

During his presentations, Blanco will invite the audience to reconnect to the heart of the human experience and all of its diversity. The questions he asks are universal: Where am I from? Where do I belong? Who am I in this world?

From noon to 1:30pm Blanco will screen and discuss, Until We Could, a poem and short film written and produced in collaboration with Freedom to Marry in support and celebration of marriage equality. Blanco will share his personal experiences of attempting to understand his place in America while grappling with his burgeoning sexual identity of being a gay Latino.

From 6:30 to 8pm Blanco will present Finding My Place at the American Table: An Immigrant’s Journey. This event will be a conversation and reading with Blanco about his search for a home in America as a child of immigrants/exiles. Blanco will discuss how his experience as inaugural poet transformed his understanding about what it means to be American, especially in the light of his immigrant family’s struggles and sacrifices.

Blanco was born in Madrid and immigrated to the United States as an infant with his Cuban-exile family. Raised in Miami, he earned a bachelor’s degree in civil engineering and a master’s degree in creative writing from Florida International University. In 2013, Blanco was chosen to serve as the fifth inaugural poet of the United States, becoming the youngest, first Latino, immigrant and openly gay writer to hold the honor.