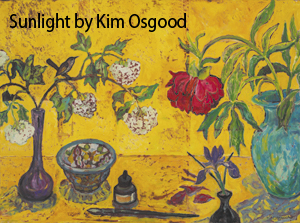 Sunriver Resort Lodge Betty Gray Gallery presents a fine art exhibit featuring Mary Marquiss watercolor and mixed media, Kim Osgood, monotypes, in the upper gallery and a feature of oil by Barbara Slater in the lower gallery. The artists will be present at an opening in their honor on Friday July 11 from 5–7pm in the upper gallery and the exhibition continues through August 2.

Marquiss, respected watercolor artist of Bend, presents work in her traditional medium and mixed media in the upper gallery.  Her well-known imagery of commanding, over-scale single blooms remains prevalent but now expands to include a delicately rendered, over-scale bird and other more extensive images.

The artist notes that these additions bring her imagery full-circle to earlier interests. Yet, her ever increasing command of the medium spirals the imagery to a new excellence. The work continues to emphasize bright color and contrast, moving from light, transparent watercolor to rich, dark pigment.

Marquiss received her bachelor of science degree from the University of Oregon and has been painting and teaching watercolor, collage and cookbook creation classes throughout Oregon for 25 years. She received numerous awards from Watercolor Society of Oregon and her art appears in collections throughout the U.S. as well as in Europe and Australia.

Complimenting Marquiss’ minimal imagery in the upper gallery is the complex design of Kim Osgood, shown courtesy of the artist and the Laura Russo Gallery of Portland. Osgood’s large monotypes emphasize negative space filled with texture and layers of rich color. Flowers, bird, vases and other objects frequently float in a clearly defined horizontal landscape of foreground and background.

Educated at the Pacific Northwest College of Art and the Rhode Island School of Design, her one-person shows include the Joshua Tree Visitor Center at the National Park as well as numerous shows in the Northwest. Her art appears in collections including the Bill and Melinda Gates Foundation, the Hallie Ford Museum, the Portland Art Museum and others.

Also showing are Barbara Slater’s oils in the lower gallery that reflect her passion that began in her youth for barnyard animals. The artist paints her impressions of the personalities of cows and roosters creating endearing visions of these subjects.

This show also introduces Slater’s richly colored floral landscapes of Central Oregon including over-scale, brilliant red and multi-colored poppies growing in fields. Ranch and Country magazine of Santa Ynez, CA, frequently features her work on its cover. She is a member of Oil Painters of America and the California Art Club.

Sunriver Resort invites the public to join the artist’s reception on Friday evening July 11 as well as the exhibitions at the Lodge, open all hours. Billye Turner organizes exhibitions for Sunriver Resort and provides additional information at 503-780-2828.