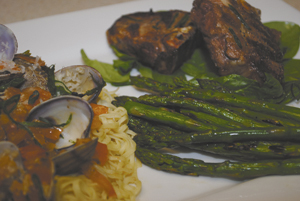 Crave has only been open since November 2010, but it has already earned its share of dedicated fans. One dentist comes in for lunch every weekday without fail. Every so often, he orders dessert first. After tasting the desserts, I know why. I also know where the restaurant got its name. But I’m getting ahead of myself.

To be honest, I hadn’t really heard of Crave when I was asked to review it, but it’s my kind of place. The attractive bungalow features open beams, lots of wood quiet, live jazz Blues on Friday Saturday nights. That would be enough even if the food weren’t good. But the fact that it is certainly helps.

My friends I started the evening with a lush bottle of Cabernet selected from a list of reasonably priced wines (most under $25). Cajun-style steamer clams provided a nice change from the more traditional recipe, along with a flavor-packed, slow burn that didn’t hit until I was reaching for my glass of red.  “That’s what sauce is for,” I thought. It was even better soaked into a bite of pumpernickel bread.

Tasty crab cakes with a light, crusty exterior smeared with a dab of pepper jelly followed. In my book, crab cakes need to feature plenty more crab than filler. Two claws up.

The h s-down hit of the appetizer round, however, was the Grilled Romaine Salad. Yup, I said grilled. Take a head of romaine lettuce, slice it in half lengthwise grill it just long enough to slightly wilt it add a smoky flavor. Then serve it with a lemon-based Cuban garlic caper dressing “it makes you want to eat salad,” concluded my friend Jill.

“I’m not messing around,” says Bend-born Kelly Detroit-Obremski, who co-owns the family restaurant shares cooking duties with husb Michael. “It’s all about the food supplying a new kind of cooking to Central Oregon.”

Since Kelly makes her own pasta, we had to try the house-made, h -crafted ravioli. You get your choice of filling (we opted for fennel-accented Italian sausage from half-a-dozen options), choice of sauce (we went with the rich Bolognese after closely considering three of the six other possibilities) eight toppings (in our case roasted garlic mushrooms). The ravioli was loaded with taste but a little al dente. For the record, the side of house-made fettucini with creamy pesto which accompanied one of our entrees was perfectly prepared. So was our deliciously tender Ribeye served with a scrumptious gorgonzola sauce garlic mashed potatoes. 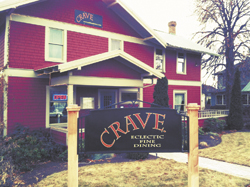 Okay, so we weren’t dieting that night. But you could if you wanted to still eat well. I will definitely return to try the sautéed Cuban Seabass, finished in white wine, green olives, onions, capers, fresh tomato cilantro. I’ll also try the pork of the day, since that’s become a client favorite. And diet or not, I’ll thoroughly enjoy every single bite of dessert I can get my mitts on.

I’ve never been a monster dessert fan, but Crave has changed all that. We ordered the restaurant’s three most popular desserts. The chocolate lava cake had a cookie pie-crust texture which I loved contrasted with the molten dark chocolate accompanying vanilla ice-cream. The homemade marionberry cobbler featured biscuits like my nana would have made if she had made biscuits instead of honey cake. But The Star (note the capital letters here) was the cheesecake (I’d write that in neon if I could). All four of us agreed that it was the single best piece of cheesecake we’d ever had. “That’s ridiculous,” said one of my dining companions. Bingo. How can something so fluffy still be so dense? Or was it the other way around? Who knows? Who cares? The real question is why I neglected to take a couple of pieces—or a whole cheesecake—to go.