Cowboy hats, custom made boots, beaded jewelry and western themed décor makes the store a desired destination in Central Oregon. Celebrating 16 years in business, Desperado will have a special anniversary party on October 12-13. 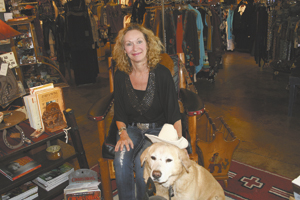 Desperado’s origins began in the Portland Pearl District in 1996. Having always been interested fashion, clothes and possessing a tremendous flair for dressing, Sunnarborg decided to open a distinctive shop following her original profession in the insurance industry. She wanted something high end with a unique theme. After dismissing several ideas, she realized Portland didn’t have a shop specifically focused on western attire. Sunnarborg had always enjoyed wearing western clothing, if only to be different while growing up on the east coast, so the leap to creating a store centered around stylish western fashions was a natural fit.

“What I love about the western theme is the history involved. The Native American art, hat making, boot making, beading, it is all wearable art. Things don’t go out of style because it is an art, a craft, a skill,” said Sunnarborg.

After 11 years in Portland, Sunnarborg was facing her son’s departure for college, and decided to move the western lifestyle boutique to Bend where the resort atmosphere would most certainly make it a popular store. She opened in 2007 in a brand new space in the Old Mill District. Many of her Portland customers lived in Bend, so she was fortunate to have a strong following from the start.

Soon the differences between doing business in Portland and Bend were evident. Leather jackets sold in Portland, not in Bend. Vests in Bend, but not Portland. Sunnarborg has since learned how to tailor her shop to the seasons, local flavor and the ebb and tide of the tourist season.

Sunnarborg shares that one of the greatest assets that has come from owning Desperado is not just helping to crush the Hee-Haw stereotype of western wear, but from the incredible friendships she has made through the store. Some of her best customers have become best friends. Much of her business has spread word-of-mouth, and she seems to like it that way.

Desperado carries a wide variety of fashion, but Sunnarborg pays special attention to her boot selection. Since opening the store, her relationship with boot maker Tony Benattar from Liberty Boot Company has helped launch his business and introduce his beautiful works of art to Central Oregon. Bennattar will be present at the anniversary celebration along with music from Greg Botsford and the Journeymen, food, drink and more.

Desperado pays special attention to local artist’s work. Barbara Slater’s western themed paintings hang on the walls, Slater is inspired by the “out west” way of life and cowboy culture with a touch of city glitz.  Painting oils with energy and spirit, this artist’s pigmentation is rich and succulent, while her brushwork is bold and responsive.  Barbara continues her studies with different genres, painting still-lifes, florals, landscapes and animals.

The store has bead work from around Oregon on display and Sunnarborg is always open to artists approaching her to sell or display western arts or crafts.
While life in retail can be challenging at times, Sunnarborg and her seven employees truly enjoy their work. Her goal is to continue to challenge those western stereotypes with attractive, fashionable and fun western couture.

The 16th anniversary will focus on Liberty Boot Co. and special event October 12-13, 10am to 8pm.