It’s getting to be the time of year when we all recognize the extra energy in the air. For some, it is an excitement hard to contain. There is a combination of spiritual rituals, equinox celebrations and family traditions and commercialism that tend to make one think of Santa Claus, and his origins. 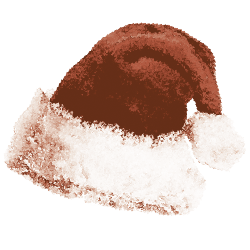 Old St. Nicholas originated because someone with a big heart wanted to help others. He is called Sinterklass by the Dutch. In China he is called Dun Che Lao Ren (Christmas Old Man). A gnome called Juletomten is designated in Sweden and in England he is Father Christmas. In France Pere Noel. In Australia Santa Claus wears a red bathing suit, and the sleigh is pulled by white Boomers (male Kangaroos). In Italy children are visited by La Befana, (a good witch),who flies down the chimney to leave gifts. Some say it is a fantasy of irrational people in many cultures of the world. Is there proof, other than the joy expressed on children’s faces?

In 1947, at the Macy’s Department Store Thanksgiving Day parade, the Santa is discovered to be drunk by a very friendly, whiskered old man, named Kris Kringle. Doris Walker (the no-nonsense special events director), persuades Mr. Kringle to ride on Macy’s float during the parade. The old man proves to be a sensation and is quickly recruited to be the store Santa at the main Macy’s Department Store. Doris Walker and her daughter, Susan, reject all notions of belief and fantasy. Yet, it is hard to ignore there is something special about Kris and his determination to advance the true spirit of Christmas. Despite reassurances by Kringle’s doctor that he is harmless, he ends up in a court competency hearing where the existence of Santa Claus is at stake.

BEAT (Bend Experimental Art Theatre) will reenact this wonderful story about Kris Kringle in the play Miracle on 34th Street. The director is Raechel Gillead and she is thrilled with the quality show she and her cast of 18 actors ranging in ages from seven to 19 have put together.

Gillead is amazed at the on and off-stage support and relationships of her kids. “We’ve grown to be one big family” says Gilland. Don’t miss out on this opportunity to believe.