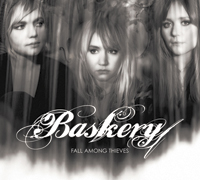 Baskery is a high energy, vivacious all girl Swedish blues/southern rock band, comprising the three sisters Greta, Stella and Sunniva Bondesson. Their first album, Fall Among Thieves, was released in Europe in 2008, and in the UK in January 2009.

The band formed in 2006 as an offshoot of The Slaptones, who featured their father Janåke Bondesson on drums, released two albums (Simplify, 2003 and Amplify, 2004) and toured the U.S. with The Brian Setzer Orchestra.

Fall Among Thieves was recorded with producer Lasse Mårtén using no overdubs and mainly first or second takes, with the aim of capturing as much energy as possible.

The group have described their musical style in such terms as killbilly and mud-country, and they have been compared with The Dixie Chicks, The Roches and Black Rebel Motorcycle Club.

I saw them in their full on energy blasting performance at the Sisters Folk Festival. Their performance surprising and attention grabbing, boot stomping rock and blues. They pushed their innovative performance into a new and refreshing mode. Some of their numbers are in the delta blues vein but most falls into what we now call Americana.

The vocally endowed, singer/songwriting sisters, all in their thirties, are all incredibly talented musicians playing rock music on traditional bluegrass instruments from Greta on the amplified slide banjo, tambourine, drums and harmonica, Stella on the double string bass and Sunniva playing a mean acoustic guitar.