The Old Mill District will host Central Oregon’s first Fermentation Celebration on July 12, from 5pm until the taps run dry.

“Craft brew culture adds an economic vitality to our region that we shouldn’t underestimate,” said Noelle Fredland, marketing director for the Bend, Oregon lifestyle center. “We’re happy to be the host location of this first Fermentation Celebration in July, as a complement to the upcoming annual Bend Brewfest coming up in August. Cheers!” 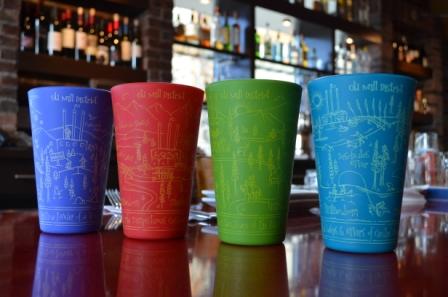 Entry to the event is free. Those who wish to partake in beverages pay $15, which includes a commemorative Silipint, launching the Old Mill District’s limited edition 2012 pint glass series. This year’s intricate design was created by Gwen Bolin to feature the four elements of earth, air, fire and water. The Silipints will be available for the first time the night of the event at Orvis, The Ticket Mill and the Central Oregon Visitors Association.

Each of the participating breweries will provide samples of a beer that is unique, limited or experimental – the Fermentation Celebration may be the only chance to try some of these brews! Participants are 10 Barrel, The Ale Apothecary, Below Grade Brewing, Bend Brewing Company, Boneyard Beer, Cascade Lakes Brewing, Crux Fermentation Project, Deschutes Brewery, GoodLife Brewing, Brew Werks Brewing, Silver Moon Brewing, Shade Tree, Phat Matts, Platypus Brewing, Worthy Brewing, Central Oregon Homebrewers and Three Creeks Brewery. Each beer will be served at select locations within the Old Mill District, and participants in the event will walk around with their Silipints to partake in samples. Also available will be a non-alcoholic fermented option Kombucha Mama.

The evening event will be filled with the sounds of Box Car String Band, which will be playing its beats in Center Plaza. Prizes and the chance to win “Ale Trail Beer for a Year” will benefit the newly formed Central Oregon Brewers Guild. Raffle tickets for the prize can be purchased at Visit Bend and the winner will be announced at 7pm the evening of the event. Special appearances by the Cycle Pub, Bend Ale Trail, Visit Bend, The Brew Bus, Get It Shuttle Brewery Tour, The Little Woody Barrel Aged Brew & Whiskey Festival, Bend Brewfest, The Central Oregon Brewer’s Guild, the Oregon Brewers Guild, the City Council and Mayor of Bend, Jeff Eager.

Also during the event, BendFilm will premiere The Love of Beer by Alison Grayson a film showcasing women in the brewing industry including local brewer Tonya Cornett (of 10 Barrel and formerly of Bend Brewing Company).  The Portland filmmaker will be on hand to answer questions.