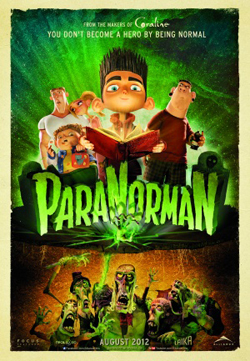 Animator Morgan Hay from Laika Entertainment in Portland will appear for a special screening of ParaNorman at Sisters Movie House, August 25 at 7:15pm.

Morgan will be bringing some honored guest stars to the event – the actual articulated puppets themselves!  Before the animated film’s showing, Hay will introduce the story’s main characters and puppets and take questions after the film.  Hay’s father, Mac Hay, has been the Economic Development Manager for the City of Sisters and shares a close relationship with his talented son.

Hay is currently the Rapid Prototype Fabrication Lead at the stop-motion feature division of Laika Entertainment, who also produced the spooky animated feature, Coraline.  He worked as Art Director on the Emmy Award-winning title sequence for the Showtime production, The United States of Tara, in addition to multiple Annie Award-winning commercials.  Hay has a Masters degree in Experimental Animation from CalArts and a Bachelors degree in Graphic Design from San Diego State University and lives in Portland with his family.

ParaNorman is a fun and fantastical new animated romp about a strange, misunderstood boy who can speak with the dead.  His colorful adventures take him into some darkly hilarious places, battling ghosts, zombies and an angry army of grown-ups to save his beloved home town from a centuries-old curse.  The film is rated PG.  Tickets to this event are limited and available at Sisters Movie House and by calling 541-549-8833 to reserve your seats.