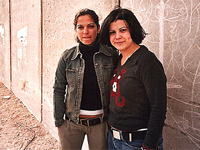 My So-Called Enemy, a feature-length documentary film by Emmy Award-winning director Lisa Gossels shown during the 2011 Bend Film Festival, will be screened on Tuesday, May 14, at 7pm at the First Presbyterian Church. The event is being organized by the Peace Committee of the Mt. Bachelor Rotary Club and admission will be by voluntary donation.

All proceeds will benefit Bend High School student, Marley Forest, who has been selected to participate in the Seeds of Peace conflict-resolution program this summer in Maine. Marley is one of 20 students in the US selected as part of the American Youth Delegation.

Spanning seven years, My So-Called Enemy follows six Palestinian and Israeli teenage girls committed to justice and mutual understanding as the conflict continues to rage in their homeland, after participating in a women’s leadership program in the U.S. called Building Bridges for Peace. The program featured in the film is similar to the Seeds of Peace program that Marley will be attending this summer. This heart and mind-opening film documents how the young women’s transformative experience, of knowing their “enemies” as human beings, meets with the realities of their lives back home in the Middle East. Through the coming-of-age narratives of the six girls, we see how creating relationships across personal, political and physical borders is a first step towards resolving conflict. My So-Called Enemy presents the complexities of the Israeli/Palestinian conflict through a human lens – and the possibility and hope that come from listening to each other’s stories.

The film has won eight awards and continues to be featured in film festivals, high schools, universities and other institutions across the nation. A film about building bridges of understanding in our own communities, My So-Called Enemy offers audiences profound messages about tolerance, inclusion and respect, conflict prevention and resolution – and the vital role of women in peacemaking.

This summer Marley will be traveling to Maine to participate as a US Delegate on the Middle Eastern team in the “Seeds of Peace” Program. She is one of 20 students from the US who will be working side by side with approximately 180 students from Israel, Palestine, India, Pakistan, Afghanistan, Egypt and Jordan. The three week conflict-resolution program is designed to open young minds to the possibility of a new reality. According to the program’s website, ” In the face of some of the world’s most intractable conflicts, Seeds of Peace gives ride to new generations of leaders uniquely inspired and equipped to build lasting peace.  Treaties are negotiated by governments; peace is made by people.”

During hours of daily discussions guided by professional facilitators, “Seeds” confront each other directly over their competing historical narratives and share their personal experiences of the conflict. By the end of the program, the Seeds have achieved new thresholds for understanding perspectives that, for many, were beyond comprehension at the start of the summer. There are now over 5000 Seeds and educators from 27 countries who prove that solutions exist, peace is possible, and there is reason to have hope for a better future.

Marley Forest is a Junior at Bend High School, working towards her diploma in the International Baccalaureate program. Last year Marley traveled to Burma in a Service Learning and Development Studies program called “Where There be Dragons” and in January of 2013 she joined Suzanne Johannsen and Mari Latimer, both from the Mt. Bachelor Rotary Club, to the Rotary Global Peace Forum in Honolulu, Hawaii. She is currently the President-Elect of Bend High’s Interact program (Rotary International’s service club for ages 12-18), has over 350 volunteer hours in the High Desert Museum’s living history department, and has lettered with the National Honors Society through her participation in community volunteering efforts. According to her mother, Laura Forest, “Marley’s greatest passion is learning how to be a global citizen, travel in a responsible way and work towards world peace. Her plans for the future are to study International Affairs and Conflict Resolution so she can contribute to making a positive change in our world.”

The fundraiser is being hosted to help defray the costs of Marley’s participation in the Seeds of Peace program. However, it is more than just a fundraiser to the local Rotary Club members and event organizers. “There are so many threads woven into this event it is thrilling to me”, said Suzanne Johannsen, Chair of the Peace Committee of the Mt. Bachelor Rotary Club. “It is a way to get our club involved in a Peace project; a way to support Marley; a way to educate the community about Rotary, Interact and Peace; a way to involve the community in a peace project; a way to create a connection with the local churches and Rotary and Peace . . . the list just goes on and on. I look at this effort as planting a seed in a garden that I hope to see bloom and grow in our community and in the world.”

Rotary International is a service organization with over 1.2 million members in over 200 countries. The theme for 2012-2103, selected by the current Rotary International President from Japan, Sakuji Tanaka, is “Peace Through Service.” The Mt. Bachelor Rotary Club meets Friday mornings at 6:45am at the Bend Golf and Country Club. Questions about the event can be directed to Mari Latimer at  mari.latimer@gmail.com or Suzanne Johannsen at  suzanne.johannsen@gmail.com. Information about the film can be found at: www.mysocalledenemy.com and information about the Seeds of Peace program can be found at www.seedsofpeace.org.