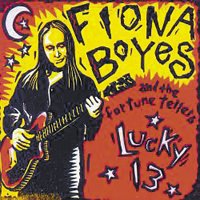 I discovered this band when searching for the top female rock and roll singers of all time. Fiona Boyes is now one of my all time favorite artists. With songs like Chicken Wants Corn, Red Hot Kisses and Rambling Man Blues who could resist this rocking soulful sound? She aggressively takes the Bonnie Raitt standard and stretches the Blues beyond the traditional art-form.

Delta pianist and Blues Hall of Fame Legend ‘Pinetop’ Perkins says of Boyes: “I ain’t never heard a woman finger-pick a guitar like that since Memphis Minnie. She’s the best gal guitar player I heard in more than 35 years.”

Boyes is an Australian blues guitarist and singer (known as an Aussie ambassador of the Blues) who is internationally recognized and the first woman and non-American to win the International Blues Challenge in Memphis.

As she has on Lucky 13, she composes, sings and plays just about anything in the Blues realm with passion and authenticity.   Boyes has been recording and performing internationally for more than 25 years, building a career that has taken her to major festivals and stages in Australia, New Zealand, North America and Europe.

Her home-away-from home is Portland, Oregon, as she follows the festival seasons in both hemispheres. When she’s back in Australia, Boyes lives in Canberra with her husband Steve, a social activist and Anglican priest, her dog Gidget, and between them they share the joys of five children and seven grandchildren.