On October 5 at 7:30 pm and October 6 at 2pm, Stage Right Productions will present scenes from four new plays in the First Annual Playwrights Platform at 2nd Street Theater.

Judges will vote to determine which play will be fully produced in May 2014. 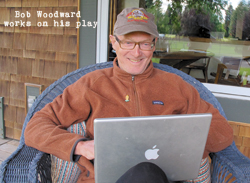 In 2013, Stage Right and 2nd Street worked closely with three Central Oregon playwrights to produce and promote their works on the 2nd Street Theater stage. Two playwrights had no experience producing plays but all three had a good level of success, selling over 55 percent of capacity or more on average.

Stage Right established The Playwrights Platform, a competition for amateur new works to be submitted and eventually produced. A panel consisting of five judges from Central Oregon with professional writing or theatre production experience was chosen to read the submissions. A total of 12 quality works were submitted then four were chosen by the panel.

The four finalists are Home Cooking by Bob Woodward, Turn the Hourglass, Quickly by Kathleen Tomko, Blemished the Musical by Katelyn Alexander and Mark of Cain by Gary Earl Ross.