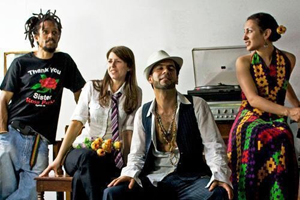 PIMPS OF JOYTIME
A band whose name carries a certain “je ne sais quois,” the Pimps of Joytime were born out of frontman Brian J’s desire to layer his broad range of musical influences — soul, funk, afrobeat, Latin, reggae and rock — within the freedom of an unapologetic dance groove. Since 2005, the wildly infectious group has grown from playing basement parties down the street to headlining more than 100 shows each year, with stops along the festival circuit at Bonnaroo, High Sierra, Outside Lands, All Good, the VooDoo Experience and more.

Despite a grueling, seemingly nonstop tour schedule, the band — Brian J, Mayteana Morales, Nicole Williams, David Bailis and John Staten — puts on show after show of high-energy, danceable and bone-shakingly funky music. The Pimps’ debut record High Steppin’ (Wonderwheel Records) dropped in 2008 to critical acclaim from the likes of NPR and BBC, followed by their sophomore release Janxta Funk! (Wonderwheel Records) in 2011. Currently writing and recording tracks for their third album (anticipated for fall 2013), the group’s charismatic frontman promises this forthcoming release will be their most inspired, distinct studio effort to date. “We are trying to make it the best album yet, the most powerful album we can do,” he explained. “To be aware of what’s happening around you in the era that you live in, but to make music that comes from your heart, that is really a statement. One that is unique to you,” he added, pausing for a moment, “that’s what we’re doing.” Both in studio and on the road, the Pimps of Joytime are not to be missed. When they come to town, make sure to bring your favorite dance shoes and a dry towel to wipe your brow, because they know how to make you shake it and sweat all over. 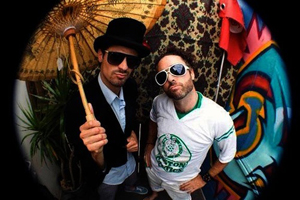 VOKAB KOMPANY
Vokab Kompany are two MC/singers from San Diego, California. Their new album, VKCE, a collaboration effort with up and coming production/musician duo Crush Effect, has been critically acclaimed and filled a void at the intersection of the hip-hop and EDM worlds. ‘VKCE’ is Hip-hop, it’s electronic, it’s indie – it’s a shout out to the past, and a taste of the future. Vokab Kompany’s Matt Burke describes the experience: “As musicians, it’s an ever evolving world; genres are a thing of the past, so we (VK) were really lucky to have teamed up with producers that pushed the boundaries of our boxes. We got outside our comfort zone, stamped a VK next to CE, and the result was something new entirely.” The brazenly dynamic sound on VKCE has quickly garnered the attention of television and film.

The record already has two national commercials, for a major carmaker (debuting 2013) and Southern Comfort. The album debuted at #47 on the iTunes hip-hop charts, behind only major-label releases from T.I. and Chief Keef among all hip-hop records released that week. 2012 saw the band play over 60 shows, including Seattle City Arts Festival, Bounce Festival, Lunacy Festival, Oysterfest San Diego, So Cal Fest and RedFest in Red River, New Mexico. They supported bands from Umphrey’s McGee to Collie Buddz and Diego’s Umbrella, while carving out headline markets outside their hometown. The spontaneity of the band’s performance art has made them underground phenoms, stealing the show with their Burning Man-esq light shows, dancers, performance artists and special guests who surprise fans at each performance. The team has been blessed with a slew of great press; in addition to a feature on electronic music in the August print edition of Spin, and “climbing” George Washington Bridge with Al Roker, the band has won best hip-hop group at the San Diego Music Awards for three years in a row, and even impressed Prince Harry when he stopped by Solana Beach’s Belly Up to catch a VK show.