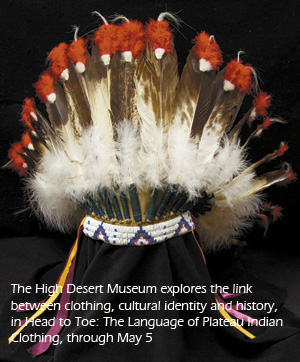 The new exhibit, Head to Toe: The Language of Plateau Indian Clothing, at the High Desert Museum, explores the link between clothing, cultural identity and history, through a rich selection of Native American hats, bonnets, headdresses, war shirts and moccasins from the Museum’s acclaimed Doris Swayze Bounds Collection.

By examining Columbia Plateau garments, visitors explore the stories these unique, skilled-artisan works, and learn about Native culture, themselves and the High Desert. The exhibit also strives to decode the language of historical and contemporary Plateau dress.

Vice President of Programs Dr. Dana Whitelaw said, “When we look at what people are wearing, we frequently can tell something about them, such as what kind of activities they enjoy or products they endorse. Clothing is more than the sum of its parts, more than cloth or leather, buttons or beads, lace or fringe. It represents a complex expression of identity, culture, status and meaning. It speaks to us, often in a language that may not be readily understood.”

Clothing from the Tamástslikt Cultural Institute in Pendleton also is included in the exhibit, offering a look at the rich traditions of the Cayuse, Umatilla and Walla Walla tribes. The Bounds collection, one of the largest collections of its kind, was donated to the High Desert Museum in 1990.

Doris Swayze Bounds spent most of her life in Oregon, and formed close associations with Plateau Indians and other regional tribes before she died in 1994. She was not of Native American ancestry, but was adopted into the Blackfeet Tribe during a special ceremony in 1965. Through her close acquaintances and passion for Native arts from the Columbia Plateau, she amassed her remarkable collection.

Head to Toe features the collection’s ceremonial and everyday clothing that demonstrate creative ingenuity and style unique to Plateau Indians. More than 20 Plateau Indian tribes lived in the region bordered by the Cascade and Rocky Mountains, and shared similar approaches to making clothes for warm days and cold nights. For example, Plateau Indian moccasins may be lined with fur, with unpadded soles, a collar tied above the ankle for protection from brush or rock and decorated with porcupine quills in geometric shapes. As new materials such as glass beads became prevalent through trade with immigrants, Plateau Indians experimented with new patterns.

During special events, women often wore twined basket hats with a zigzag pattern, traditionally made from bear grass and woven into an elongated shape. More recently, they have been made from commercially available products such as cotton thread, woolen yarn or beads. Although materials may have changed, clothing continues to be an important form of self-expression. Head to Toe explores how clothes played an important role in the assimilation of Native Americans, as well as a way of communicating pride in traditions that live on today.

Exhibit runs through May 5, www.highdesertmuseum.org.