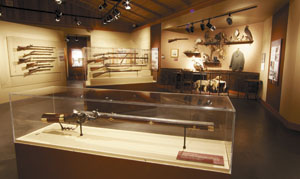 On the Far West frontier of the 1800s everyone owned some kind of firearm. Homesteaders carried rifles to protect their livestock. Cayuse Indians used smoothbore muskets to bring home fresh meat and skins. Naturalists armed themselves with fowlers to shoot birds for scientific study. Women carried dainty pistols to defend themselves from outlaws. For all these people, firearms were an essential tool.

Frontier Firearms: Stories of Survival and Defense at the High Desert Museum reveals the stories of these diverse people and shows how guns were integrated into the fabric of Western society.

Combining photographs, artifacts, artwork, characters and more than 50 historic firearms, the engaging new exhibit answers key questions about the culture of the 19th-century West: What firearms did people use on the frontier? Did everyone carry the same guns? How did they choose a firearm? How violent was the frontier?

Dr. Margaret Lee, curator of the exhibit, insists you don’t have to be a gun enthusiast to enjoy Frontier Firearms.“This exhibit is about the culture and the people, as much as the guns. It will immerse visitors in the lives of explorers, outlaws, soldiers, Native American warriors and more, showing how these everyday people used guns for protection and subsistence,” Lee explains.

“I just love some of the characters that we’re focusing on, like Stagecoach Mary from Montana, the first African American woman to ever work for the U.S. Postal Service. Yellow Wolf, of the Nez Perce, relative of Chief Joseph. Martha Maxwell, who was a taxidermist and naturalist in Boulder, Colorado. These historic figures are very compelling.”

Frontier Firearms will bring history to life with immersive scenes and historical characters. Artifacts will include both historic firearms and other objects that would have been common for the different social and cultural groups featured. Finally, historic art and photographs will help visitors understand firearms in context and visualize life on the 19th-century frontier.

The exhibit features more than 50 historically-significant rifles, pistols and shotguns from the permanent collection at the High Desert Museum, the Oregon Historical Society, Oregon Sheriff’s Museum and from private collectors. A few of the notable pieces include:

Frontier Firearms will be divided into eight thematic sections: Explorers and Naturalists, Trappers and Mountain Men and Miners, Native Americans, Military, Lawmen and Outlaws, Women, Hunters and Technology. The exhibit runs until February. Sponsored by Nosler Inc., with support from Century Insurance and James F. and Marion L. Miller Foundation.