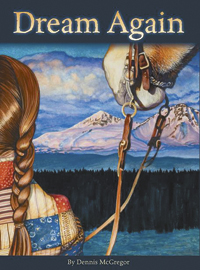 In 1989 I moved to Sisters, home of the world’s largest outdoor quilt show. I loved seeing how the quilts transformed the tiny town and immediately wanted to do a poster for the show. Turns out I did, and that led to thirteen more consecutive posters. They were all well-received, but none was more popular than the Oregon Trail image from 1994.

Something about covered wagons struck a chord with quilters. I decided to do another painting with a covered wagon in it. There happened to be a one parked down the street from me and I took some pictures of it. I liked the angle from down low.

I imagined the wagon floating in water and immediately thought of a quilt falling from it. To see what the quilt would look like underwater I asked my photographer brother, Brent, to take some pictures. I dragged him up to Blue Lake and he jumped in with his snorkel and water-proof camera. Many photos were taken as we cast my quilt out again and again, reeling it in with the string we had attached.
Even with a full wetsuit, Brent lasted only a few minutes in the 39 degree water. These reference shots enabled me to do the painting, The Crossing, which inspired the story and became a possible choice for the cover.

The rest of the paintings were finished, one after another, as I found time over the next few years. I used friends for models and Central Oregon’s landscapes as backdrops. The story, set in 1845, was driven by the notion that every antique quilt in every home today would have some kind of story to tell. I looked at my old quilt and wondered, “What did this quilt go through over the last century and a half before it ended up in my home?”

Dennis welcomes his new titles of both Grandpa and author, but he is best known as an illustrator who specializes in poster design. His definition of a successful poster is one that people like enough to buy, frame and hang on their wall. He concluded long ago that if his advertising posters didn’t get stolen from store windows where they were hung, he wasn’t doing his job.
Over the years he has found that most people respond to clever ideas that are realistically detailed in a fanciful way. The skills developed in this pursuit have created a style that is perfect for old-time story illustrations.

McGregor also has been a musician and songwriter most of his life. His love of crafting lyrics prepared him for the challenge of writing the stories yet to be imagined.
Dennis is pleased to release his first children’s book, Dream Again, and he looks forward to the next one.