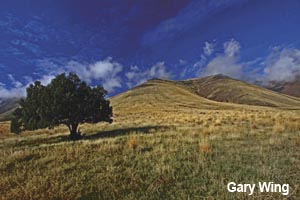 The two person exhibition of photography by Gary Wing and Linda Ziegenhagen is featured through November 7 in the brewery’s taproom.

Wing grew up in western Montana, and it was there in the Rocky Mountains he developed a love of the outdoors, either hiking or riding his horse in the mountains behind his house. Moving to Redmond in 1959 and graduating from Redmond Union High School in 1964, he developed a passion for the desert country and the Cascade Range.

After graduating from OSU, Wing had a career as a biologist and also worked as a ranch manager. Retiring in 2011, he returned to his passion for photography, which he had begun in the ’70s, but could never find time for. He combines his photography work with his wood working skills and produces all his own wood frames.

After retiring in 1999 after a 30 year teaching career with the Redmond School District, Linda Ziegenhagen had time to pursue her interest in creating pictures.

With the purchase of a digital camera, she now had a new affordable medium with which to share her views of the world and allowed her to become more involved with photography.  For Ziegenhagen, learning is on-going and she was energized by COCC classes and by memberships in the CCC and SAPC photography groups.

One of the newest breweries in Redmond, Juniper Brewing Company was inspired by a passion for brewing great craft beer. Co-owners Curt Endicott and Scott Lesmeister have pledged to consistently offer the “highest quality ales to the growing populous of enlightened consumers.” The Juniper tree silhouetted on their logo is an ancient beast that stands out front of their initial brewing location and long ago was given the name Old Roy. Their IPA, with the same name, is an honorary tribute to this tree for standing the test of time.