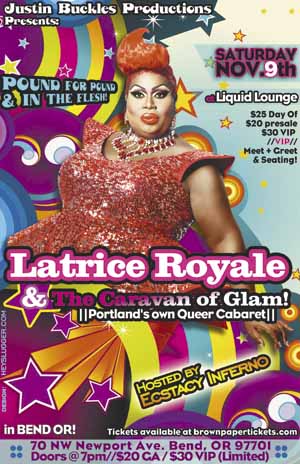 The Caravan of GLAM, Portland’s own Queer Cabaret Troupe, consists of a rotating cast of over 50 performers from all over the Pacific Northwest and all the way down to San Francisco. The troupe consists of all genres of performers: Drag, Burlesque (male and female), S&M, Acrobats, Comedians, Live Singers, Gymnasts and Sideshow Performers.

The show’s main producer Justin Buckles has nearly 15 years of experience in film, television and live event production having lived in Los Angeles and worked on such shows as American Idol, So You Think You Can Dance and Gene Simmons Family Jewels.

Justin has produced dozens of LGBTQ events in Portland over the last four years and is the creator, manager and executive producer for all Caravan of GLAM events.

The Caravan of GLAM will be producing bi-monthly shows at Liquid Lounge with the debut with Latrice Royale. Co-producers and co-emcee’s for the show are Ecstacy Inferno and Terese Thompson, Central Oregon LGBTQ ally and community personality.

Tickets
www.brownpapertickets.com or at the door the day of the event.

Doors will open at 7pm, with the show starting at 8pm. VIP tickets include reserved seating and a personal Meet and Greet with Latrice Royale and the cast of the Caravan of GLAM. Tickets are $20 General Admission, $30 VIP, and $25 day of / at the door. The show will conclude at 11pm.