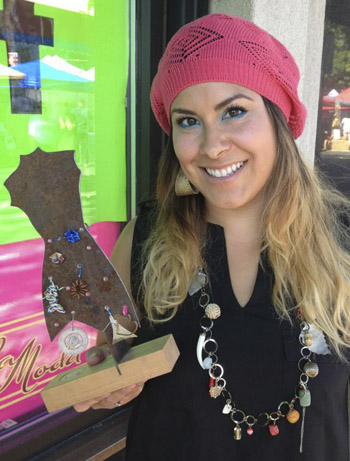 Rooted in a love of fashion, an appreciation of art and a passion for the planet, Rubbish Renewed Eco Fashion Show will be shown twice on January 16 at The Bend Armory as an annual fundraising event for REALMS Charter School.

Panambi Elliott is a local artist whose creative medium is trash. Not just any trash, Elliott works with discards from small businesses or garage sales, evolving them into clothing and jewelry. And, while most of us were celebrating the holidays, Elliott has been rising at 6am and heading into her studio to put in coffee-fueled,10-hour days fashioning outfits from local companies’ casts-offs for the upcoming Rubbish Renewed Eco Fashion Show.

A two-time winner of the show’s coveted Trash Trophy, this year Elliott may have met her creative match. She’s working with waste from Hydro Flask, with the goal of fashioning a garment from labels, three types of bottle lids and the plastic that holds them together. She confesses, “It may be harder to get the materials to work for me this time.” But for Elliott, that’s the hook.

Elliott began sewing as a teenager, and considered herself an artist long before her creations hit the runway. In Hawaii, Elliott attended The Kona Brewing Festival—a zero-waste celebration put on by an eco-passionate company—and it was there that she first realized, “I can do this.” Elliott’s best friend stepped in as mannequin and stood through endless fittings. “I mistakenly hot-glued her several times,” said Elliott, “but she hung in there until I was finished.“

While fashion designs may sound glamorous, Elliott’s choice of media involves getting her hands dirty. One of her Rubbish Renewed designs in 2011 was a Cuppa Yo dress fashioned entirely of containers and plastic spoons. Elliott drove past the new yogurt shop and thought, “This store has a great logo that’s so colorful.” She approached the owners with her idea and once they got over the fact that she wanted their trash, were completely supportive, even rinsing their discards. For the dress’s bustier top, Elliott broke off the bottoms of each spoon, drilled a hole in the top and hand sewed each one, creating a shell-like appearance. While fabricating the outfit was incredibly time consuming, the end result was stunning, setting a high bar for future business challenges.

Last year, the owner of Sounds Fast suggested that Elliott create a garment from the discards of his car stereo company. Up for a challenge, Elliott collected wire, car vinyl, upholstery, speakers and LED light strips, and from these eclectic objects created a sexy, illuminated dress that featured soldered lights charged by a battery. Elliott hand-sewed wiring into the bra, and used extreme super glue to wrap wires into a skirt. The garment weighed over 25 pounds, but model Beth rocked it on the runway, and again, the design was awe-inspiring and garnered Elliott another trophy.

Elliott’s muse these days is online fashion sites, but she loves pushing the envelope creatively. When asked for whom she would like to design, Elliott answered, “Lady Gaga.” When she’s not fashioning garments, Elliott is busy creating jewelry from leather discards and working as a cosmetologist. Elliott has an extensive support team, made up of her husband Josh, her mother, her siblings and her extended Paraguayan family, and feels she wouldn’t be nearly as successful without them. “They are my biggest fans,” she says.

Rubbish Renewed co-founder Amy Anderson commented, “Panambi’s ability to transform ordinary trash speaks to the mission of this event.  We hope that seeing trash transformed into a true art piece can help people make their often unconscious choices more conscious.” For those who love Project Runway,the Rubbish Renewed Eco Fashion Show showcases how we “fashion” our lives while lessening waste in an unforgettable night that taps the remarkable design talent of our community.

Rooted in a love of fashion, an appreciation of art and a passion for the planet, Rubbish Renewed Eco Fashion Show will be shown twice, at 6pm (including student creations) and 8:30pm (adults only) on January 16 at The Armory (875 SW Simpson) and is an annual fundraising event for REALMS Charter School.  Started in 2010, this fundraiser includes a wearable art runway show, a live and silent auction, a marketplace and local food and drink.

Tickets at Wabi Sabi, at REALMS Charter School or www.rubbishrenewed.com.  If not sold out, tickets can also be purchased at the door.  Tickets  $15 for adults and $100 for students.