Special guest Don Felder, former lead guitarist of the Eagles, will be joining Peter Frampton and Buddy Guy for a night of guitar legends on August 23. 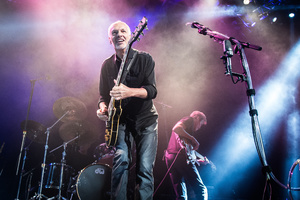 Frampton will be joined by fellow Hall of Famer and celebrated guitarist, Buddy Guy, and the legendary lead guitarist for the Eagles, Don Felder, for an epic evening of music that will blend their signature rock and R&B styles. Frampton will be playing a mix of his past hits and songs from his latest album, Hummingbird in a Box, which was inspired by his collaboration with the Cincinnati Ballet.

Fans of Jethro Tull will be treated to a knockout set list of favorite Tull songs, performed by the band’s lead vocalist, Ian Anderson. With a huge cinema-quality screen and moving LED lights to add to the music experience, Anderson will play a blend of favorites and new songs for this electric performance. He will be playing tracks from his newly released and critically-acclaimed album, Homo Erraticus, and also will include all the Jethro Tull classics from his time as the band’s iconic front man.