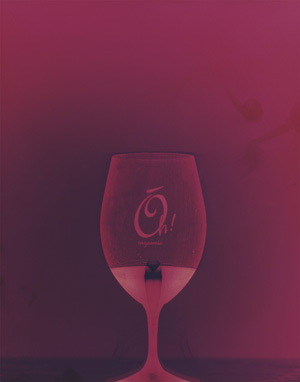 Natasha Bacca will be exhibiting her artwork at Old Mill District throughout March. Frequently using wine bottles and wine glasses in her work, Bacca has incorporated Oh! Orgasmic bottles and glasses from Naked Winery into her series, which is anticipated to be a highlight at the exhibit.

She says, “This series is inspired by my love for wine.  My family name, Bacca, means berry in Italian; similar in notion to Bacchus, the Roman god of wine.”

Bacca began creating her series of wine-themed artworks several years ago, but she says, “I have recently been inspired to resume this series.” With over 30 pieces in the series already, Bacca says she has developed several new techniques to expand the series.

Bacca’s artwork is created with a patented process. She creates photo-based art, but does not use a camera or computer. She says, “Creating unique art in a darkroom I revisit the wonder of photography’s invention and process. Merging current technologies with deep-rooted photographic practices, I use light emitting devices to brush color into form across light-sensitive paper. A unique approach to the production of photographic art, I do not document an existing image but rather, like a painter, generate an original one. Manipulating color, intensity and direction of light, I literally paint with light.”

Naked Winery manager Peyton Joscelyn says she selected Bacca’s artwork because she “thought it was fun and fanciful! It would make a great Mother’s Day and club pick up showing because it is bright and colorful! In personality, I thought of it as whimsically.”

Enjoy a fun and romantic evening filled with wine-art March 2 through 29 while Bacca’s artwork is on exhibit at Naked Winery, located in the Old Mill.

Artwork by Natasha Bacca has been exhibited internationally and is featured in private, public and corporate collections. Collectors include NASA, Hilton Hotels, Kaiser Permanente hospitals, Arizona State University, Northern Arizona University, Lane Community College, Central Oregon Community College, Deschutes Brewery and many more. Additionally it has been featured on Billboards across the United States and television shows, including CBS’s Two Broke Girls, ABC’s Last Man Standing and Scandal, and Oregon Art Beat. Natasha Bacca has been granted a U.S. patent for the process by which she creates her art. In April, Bacca’s wine artworks will be featured in Wine Enthusiast Magazine.