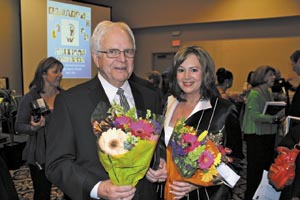 Tom Del Ruth, ASC and Patricia West-Del Ruth (residents of Bend) were recently honored with Living Legacy Awards for being Pioneers in Cinema Arts presented by the Women’s International Center.

In 1999, Patricia started Creative Heart Productions and produced Creative Cafe’ which was shot at their home in San Diego while Tom was shooting The West Wing. The focus was on their creative journeys and the daunting mission of pursuing your vision through in-depth interviews with cinematographers, producers, writers, actors, film composers and independent filmmakers.

Patricia also produced Cinema Scene comprised of actors, writers and independent filmmakers shot in a TV studio.  Both shows aired on local television channels and she garnered four Telly Awards and in 2005 was recognized by San Diego Magazine as one of the Top 50 Individuals to watch.

The couple, who have been married for 31 years, moved to Bend in 2005 and Patricia became an advocate to the Oregon Film Office helping to support tax incentives and testifying to the state legislature. She served as director of cinema arts education for Film Oregon Alliance creating lectures, workshops, seminars and interviews with professionals in the film and TV industry.

Patricia received the WIC award for Excellence in the Cinema Arts. Tom was recognized by the WIC for his excellence in artistic achievement in Cinema Arts and for bringing a feature film look to TV.

In accepting her award Patricia said, “I have always been fascinated by the art and craft of filmmaking and its influence on culture. Great filmmaking transcends our borders and creatively connects us on a global level. Thank you to the Women’s International Center for recognizing Cinema Arts Education as a touchstone to universally understanding human conflict and the human spirit.”

Tom exclaimed, “I would like to thank the Women’s International Center for bestowing this prestigious honor on us. I am personally flattered that they would give this award to a MAN. HUM! Maybe they know something I don’t. But come to think of it…I am very partial to quilting.”