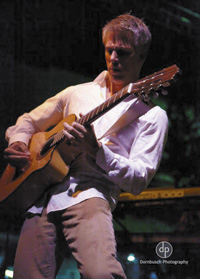 This summer will mark the 10th anniversary of Crook County Foundation’s Picnic in the Park, held every Wednesday evening from mid-July through August. More than 3,000 people enjoy listening to music in the tree-shaded Pioneer Park beside the historic Crook County Courthouse every summer. The concerts are free due to generous contributions from many local business sponsors including Mid Oregon Credit Union, Oregonians Credit Union, Facebook, EOFF Electric, Robberson Ford and American Family Insurance.

The 10th anniversary celebration will kick off on July 16 with a pre-concert barbeque and entertainment for the kids. Music begins at 6pm with guitarist Todd Haaby and his band Sola Via performing their spicy Nuevo flamenco music.

“We wanted to make the 10th anniversary something special,” said Lisa Morgan, Crook County Foundation board member who chairs the planning committee. “The music this summer will feature some of the most talented and diverse bands performing in Central Oregon.”

Concerts held from 6–8pm in Pioneer Park in downtown Prineville. Lawn chairs and blankets are recommended. Picnics are optional. (NOTE: The August 6 Diamonds concert will be performed at Crook County Fairgrounds.)
541-447-6909.