The Tower Theatre Foundation, in collaboration with BendFilm, will present the Central Oregon premiere of the new documentary on the surprising and entertaining life of Pulitzer Prize-winning film critic Roger Ebert. Based on his memoir of the same name, Life Itself debuts Wednesday, July 23 at 7pm at the Tower.

Part critical biography and part personal history, a centerpiece of the movie reveals how Ebert and Gene Siskel revolutionized film criticism and became the most recognized and powerful movie critics in the world.

In pre-show remarks, the Tower’s Executive Director Ray Solley will share his memories and inside stories as producer of Roger and Gene’s PBS series Sneak Previews. Thea Flaum, executive producer of Sneak Previews and one of the principal interviewees in Life Itself, is slated to attend the Tower premiere foran audience Q&A after the film. 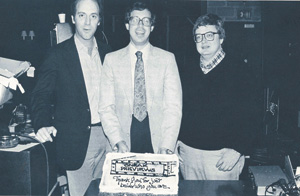 “Working with Roger was my first job in television,” said Solley. “It was full of pressure, but with a sense of adventure. We were on the outskirts of Chicago, building a new television format, intensely focused on making a show that talked simply and honestly about the movies. Whenpublic television viewers started falling in love with the series, we were thrilled.

“Showing this documentary is an opportunity for me to reflect on those early days, from fights with Roger and Gene to casting the Dog of the Week to winning an Emmy with them.”

The film travels through Roger’s precocious start in Urbana, Illinois; his migration to Chicago; his unexpected promotion as the Chicago Sun-Times’ movie critic; the creation of the television show that revolutionized film criticism; and his difficult and inspiring fight with cancer.

Todd Looby, executive director of BendFilm, commented, “As a fellow alumnus of the University of Illinois and a former Chicagoan, my life was hugely impacted by Roger Ebert. His enthusiasm for film was infectious and his attitude about life was inspiring. He played a key role in my decision to become a filmmaker. BendFilm is honored to help bring this film to Bend.”