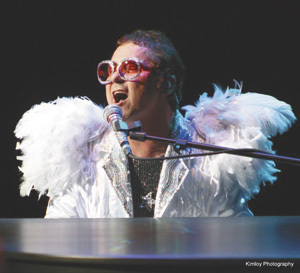 Experience a 1970’s Elton John show, complete with bell-bottoms, platform shoes, glitter, glasses and sequins. Kenny Metcalf pays tribute to Early Elton in a special one-man-show for Tower members, sponsors and volunteers. Presented by the Tower Theatre Foundation on Saturday, August 9 at 8pm, Metcalf sits at the Tower’s Steinway piano and personifies the sound and the look of the young, iconic Elton.

“The show’s in two parts and covers all the classic hits,” said Metcalf. And costumes, including the Bob Mackie Los Angeles Dodgers uniform and Ray Winston glasses,“complete the impression,” he added.

“He sounds just like Elton,” remarked Caleb Quaye, Elton’s first producer and original lead guitarist. “And his piano playing and stage antics are so accurate you wonder if you haven’t been transported back in time to some of the historic concerts like Dodger Stadium in 1975.”

Even with its undeniable sense of déjà vu, Kenny Metcalf as Elton was voted The Best Live Performance for 2013 by Examiner.com.

Tower Theatre Foundation development director Todd Dickerson observed:“This is our way of saying ‘thank you’ to the hundreds of supporters who make the Tower such an important part of our community.”

“It’s not too late to become a member,” noted Lisa Vann, the Tower’s membership coordinator. “Join now at TowerTheatre.org/support/membership and grab your ticket for a trip down memory lane.”