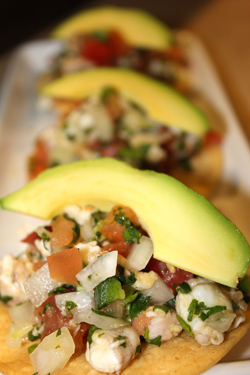 “I felt full but I didn’t feel heavy like I do when I usually eat Mexican food,” one of my three dining companions announced after our feast at Si Señor Cuisine & Spirits, the restaurant that Baltazar Chavez opened in the Bend Factory Stores outlet mall.

The secret lies in top-notch ingredients, a menu that emphasizes seafood, and an owner who knows what he’d doing in the kitchen, a fact to which anyone who has gone to Baltazar’s Seafood Restaurant off of Century can attest.

Admittedly this new restaurant lacks the charm of the other; a decorator’s touch would help. But for the most part, the food is just as good—and more reasonably priced—than the original’s and lunch is downright affordable for this quality of food.

After sipping our pint-sized fresh margaritas, my friends and I started our meal with the shrimp ceviche, which Baltazar marinates to order for just eight to 10 minutes. The resulting bright, fresh, citrusy, tender shrimp served on three small, crunchy corn tortillas wowed all four of us. “The best ceviche in Bend,” we concluded. You can judge for yourself since Si Señor will be offering a free ceviche appetizer through March with purchase of two entrées and two margaritas.

We also had an order of guacamole. Although it could have used a little more lime juice for my taste, it was fresh and delicious just the same. I also loved the healthy portion of pico de gallo—chopped tomatoes, onions, serrano chilies, cilantro and lime juice—that accompanied the guacamole.

Yes, Baltazar has always provided healthy portions of just about everything and Si Señor doesn’t disappoint on that front. That’s a beautiful thing when you’re in love with the dish you’ve ordered. Order the Seafood Relleno, two fresh pasilla peppers, with just a hint of heat, filled with rich shrimp, crab and scallops, topped with seafood sauce and Monterey Jack cheese and then roasted rather than deep fried and you’ll know what I mean. When my most regular dining companion took her first bite, her eyes rolled as she clearly traveled to another planet.

“I don’t know if I can let this go,” she said when it was time to rotate our plates so that everyone could try everything. “I’m going to tell everyone I know about this Seafood Relleno.”

She and my other two friends were still talking about the dish days later.

The Camarones al Mojo de Ajo delivered exactly as they always do when Baltazar is at the helm. The prawns, sautéed in butter, garlic and mild spices, are huge and downright succulent. The plump mushrooms, a twist on this traditional dish, add another layer of rich flavor. As if the sauce wasn’t buttery enough, a small bowl of butter for dipping purposes also comes on the plate.

“This is all Baltazar,” announced one of my dining companions. “I love this dish.”

Yup, he sure has a way with seafood. That’s not a huge surprise once you learn that this native from coastal Mazatlán, Mexico comes from a family of fishermen. So as a youth he ate—and cooked—seafood daily. The good news is that you can now enjoy his superior fare not only for dinner but for lunch, too, a fact that is just too tempting for some. One of my dining companions shared that her son’s school had called to say that her studious teenager had ditched a class. When she confronted him, he simply said, “We went to Si Señor and had a fajita burrito.”

Who can blame him?