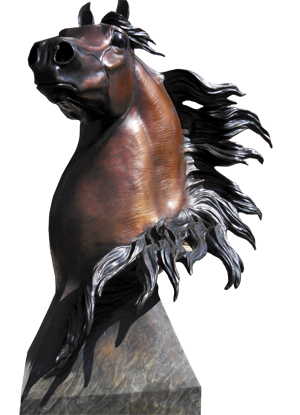 Recently the City of Redmond asked its residents to vote on their favorite sculpture from the first installation to purchase as a part of the permanent collection. Over 375 votes were collected and the winner of the people’s choice vote is Sirocco, a beautiful bronze sculpture of a stallion’s head. Although all of the sculptures in the program received votes, Sirocco received 283 votes and was the clear favorite.

The artist is Jan Van Ek, who resides in southern Oregon. Jan is well known for her bronze horse sculptures throughout the Northwest. Although Sirocco retails for $39,000, Jan agreed to sell it to the City of Redmond for $9,000 because she likes how it looks in Redmond and believes that it suits Redmond well. “We only had a maximum of $9,000 to purchase a sculpture, and I was nervous when we put together the people’s choice vote, because I suspected that the community loved Sirocco, but I was not confident that Jan would agree to sell it to us for the money we had available,” Richards said. “We would not have been able to put Sirocco on the ballot if it cost more than $9,000 and I did not want to disappoint the community. I was shocked and grateful to Jan when she agreed to the price. Redmond is very lucky to have the opportunity to purchase this beautiful sculpture for such a reduced sum.”

Funding for the purchase of the sculpture came from a variety of sources, including an Oregon Arts Commission Grant, private donations and the City of Redmond.

Sirocco is installed at the corner of Deschutes and Sixth Streets where he will remain after his purchase.

Of the remaining sculptures, two will remain on loan to the City of Redmond for two more years, Rain Tree, a stone/steel sculptural fountain in Centennial Park and Iris, a bronze wall plaque located at the City Hall front entry.

Two additional sculptures, Inner Workings and Roots were removed by the artist on in August. All four sculptures still remain for sale, if someone wants to purchase them for their own private use or for a donation to the City’s public art collection.