The series begins Saturday, January 19 with Grammy-nominated bluegrass group the Claire Lynch Band. Long recognized and praised as a creative force in acoustic music, Lynch is a pioneer who continually pushes the boundaries of the bluegrass genre. 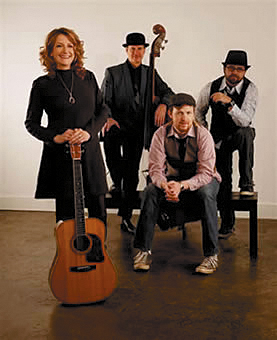 The current Claire Lynch Band is a powerful juggernaut, a quartet that has the innate ability to perfectly interpret the beauty, subtlety and genre-defying sophistication of Claire’s music. She plays compelling original tunes and has been nominated numerous times as IBMA vocalist of the year. Claire Lynch is a gifted writer and singer with a top-notch band. Mark Schatz, long with Tim O’Brien and the O’Boys, among others, will perform a little hambone and Appalachian clogging.

On Friday, February 15, the series will feature the incomparable Portland Cello Project, with special guest Adam Shearer. This eclectic and riveting act combines the power of seven cellos performing everything from Radiohead to Metallica to classical music and more. Since the group’s inception in late 2007, the Portland Cello Project (or PCP, as their fans affectionately call them), has wowed audiences all over the country with extravagant performances; mixing genres and blurring musical boundaries and perceptions wherever they go. Their newest CD embodies the group’s belief that “collaboration is the cornerstone of independence and artistic freedom.”

They have performed with a veritable “Who’s-Who” list of Portland musicians, from Laura Gibson to The Dandy Warhols, Horse Feathers, Mirah and Loch Lomond, just to name a few. In that light, Adam Shearer, long known as the front man for the Portland-based band Weinland, will perform with them and act as emcee.

On Wednesday, March 20, Sisters Folk Festival welcomes back legendary Americana artist and songwriter Tom Russell. Tom Russell is a master storyteller and has recently released Mesabi, his 26th album, a work that instantly grips the listener and holds on as vivid scenarios unfold from tune to tune. He is truly an American original and is writing out of “the wounded heart of America,” a searing and telling pictorial of the American Southwest experience. Russell is credited with helping to create the Americana radio format with the great Dave Alvin. “It’s rare indeed when a songwriter is so strong in his own unique voice and style that they redefine the music boundaries that are in place, this is Tom Russell,” says Sisters Folk Festival Executive Director Brad Tisdel.

Along with providing music and arts-oriented curriculum in the Sisters schools, Sisters Folk Festival is committed to providing affordable, quality entertainment in Sisters during the off-season. The concerts help stimulate the local economy, especially since the Winter Concert Series has developed a reputation for bringing top talent to Sisters.

A $40 package deal for all three concerts is available for purchase up to the beginning of the first concert. A student package is offered for $25 as well.

www.sistersfolkfestival.org or 541-549-4979. Tickets are also available at Paulina Springs Books in Sisters and Redmond and FootZone in Bend.