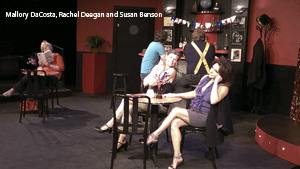 Directed by Nancy Scher with musical direction by Scott Michaelsen, this sparkling theatrical gem is filled with humor, romance, drama and nonstop melody, a thrilling celebration of life and the indomitable fighting spirit that keeps us all going.

“We have a wonderful ‘who’s who’ cast made up of some of Bend’s most talented actor/singers,” said 2nd Street Theater’s Managing Director, Sandy Klein. “World Goes ‘Round is such a treat for the eyes and ears. Nancy has taken a musical revue written by the Kander and Ebb duo who brought you hits like Cabaret and Chicago, and transformed it into a sweet show about love and life. The audience gets to “hang out” at the Club and watch these regulars grow and change over time. It includes many familiar Kander & Ebb smash hits like All That Jazz, Mr. Cellophane, and Cabaret, along with some less familiar, but equally as engaging numbers. You can’t help but get caught up in their stories, told through some really beautiful music!”