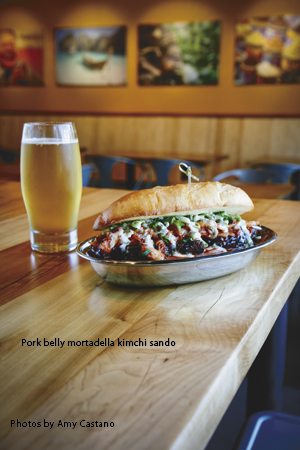 “What was that style of cuisine?” my brother asked of the Spork leftovers I had bequeathed him.

“I suppose you’d call it Latin-Asian fusion,” I said, even though the Spork website defines its fare as “exciting and inspired…global eats at daily prices with a green sensibility that includes goals of sourcing ingredients locally.”

If he thought that was good, he should have been at dinner the night before.

We started off with a round of cocktails, including an Old Fashioned; a Java Sour with pepper-infused tequila, fresh grapefruit, lime, tamarind agua fresco; and a Tradewind 62 with rye, fresh grapefruit, fresh lemon, raspberry drinking vinegar and soda. As refreshingly different and tasty as those drinks were, they didn’t compare with my Maui Z. The pepper-infused vodka, rum, fresh lime, cilantro, mint and pineapple juice hit my palate like a xylophone performance, each note ringing in separately. That drink would set the tone for the entire dinner, since I proceeded to experience the flavors of almost every dish in exactly the same way.

Before heading up to the counter to order, my friends and I debated the options. We had chosen most of our dishes (all priced at $12 or less) when a man sitting next to us with a toddler in tow weighed in. “I come here three times a week,” he said. “Everything is great.” We couldn’t go wrong. Excellent!

The person taking our order couldn’t have been nicer or more helpful. When we asked about one of the few dishes not marked as Gluten-Free on the menu, he quickly announced that they could use a gluten-free soy sauce.

We ordered with abandon, to the point where our dishes—all beautifully plated on metal ware—barely fit on the table. We started with the carnitas tacos served on small, grilled corn tortillas with fried garlic salsa. I loved the smoky taste from the homemade tortillas, the healthy amount of shredded, tender pork, the play on textures that slivers of crunchy radish brought and the delayed heat from the jalapeno pickles. At just $3 per taco, I realized that I could pop in for a very affordable lunch in the future. 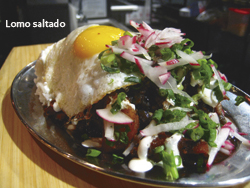 We tried the two side dishes we’d ordered—fried yams with chimichurri (a spicy, vinegary, green sauce with garlic) and the cumin-spiced potato-cucumber cakes special—and debated about which we preferred, then moved on to the Spicy Fried Chicken which proved to be the evening’s favorite. “They nailed the fried texture,” my friend Deborah said of the rice-flour battered boneless, spicy and subtly sweet chicken pieces, beautifully contrasted by mildly spicy, vinegary kimchi (a Korean cabbage salad).  Then she looked over to her husband.  “Ben just made his slap-me-silly face,” she said laughing. “That means he really loves it.”

The Lomo Saltado, a Peruvian steak, potato and red pepper stir-fry topped with a fried egg, tasted like a big plate of comfort. It is a bit on the salty side, so this is the dish for you if you’re a salt aficionado. The Beanthread Noodle Stirfry, made with thin, silken mung bean vermicelli glass noodles, grilled vegetables, ginger, scallion and soy, offered that recurring concert of staggered flavors. The fact that we had added crusty chunks of pork belly, which actually weren’t overly salty, took the dish right over the top.

The Grilled Romaine Salad may have been one of the biggest surprises of the evening. We had figured that the romaine hearts served with candied pepitas (pumpkin seeds), mild poblano chili pepper, queso freso (a creamy Mexican cheese), Asian pear and toasted cumin buttermilk dressing would provide a nice, light contrast to the rest of the dishes. We didn’t expect smoky lettuce that was still perfectly crisp or the melding of flavors that made me wonder how they had achieved that even as I reached for the next bite. “I think this is the breakout hit,” announced Ben.

Spork has clearly come a long way from its Airstream days when it was the coolest food cart in town. As we left the restaurant, which opened earlier in 2013, I looked around and noticed that the restaurant patrons spanned five generations, with children at almost every other table. Now that’s what I call a family restaurant!