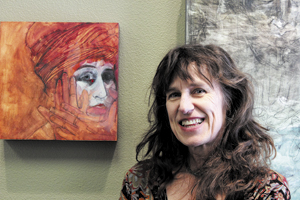 A story unfolds. As layers of paint and line build and transform a blank canvas, the narrative takes shape. What transforms the assemblage of mixed media: gauche, acrylic, pencil, charcoal and ink is what makes Terry Gloeckler’s work sing: emotional, mental and physical exploration of an idea, feeling, surface or material.

By never knowing where the piece will end or what will be discovered, she finds the true enjoyment of the artist: the process itself. “I found life in the studio,” Gloeckler explained.

She resisted the magnetic appeal of art at first. Gloeckler hails from a family life richly steeped in the arts; her father, a printmaker, worked daily with woodcuts and engravings, and her mother in textiles and design. “I fought that,” she said. “I went to the university and thought the one thing I would not study is art.”

Instead she entered the University of Wisconsin – Madison as a competitive gymnast and  prepared for a career in science. For fun she took studio art classes and really thrived. “I found I felt so alive in those courses,” she said. She kept taking art classes along with her other course work and found she had taken so many classes she basically had a degree in art. She picked up a teaching certification and graduated with an Art Education degree.

Gloeckler began her career as an educator in Wisconsin and later decided to return to the class room for a doctorate in art education. “Again I kept taking studio courses and had a lot of encouragement to go the studio route.” She explained. “I did the course work for the graduate degree in art education… but I had basically finished my Masters in Fine Art (MFA).” When job offers started rolling in to teach at the college level she ultimately decided to forgo the doctorate and graduated with a MFA in painting and drawing.

“I love teaching children of all ages, but at the college level you are able to go so much deeper into the discipline of art,” Gloeckler explained. “When I’m working with students, even a foundation drawing class, [I feel like] the life of a drawing or the life of a painting is like life.

“Sometimes you have worked so hard on an area [and if it’s not working] you have to let it go. But, whatever happened, you haven’t lost anything. You still have within you everything you have learned and experienced with that effort.”

Her teaching career then took her to Eastern Oregon University in La Grande. She would spend the next 10 years at the university while diving deeper into her own art, participating in national juried art exhibitions and touring the country at the invitations of colleges and universities to give public lectures and critique graduate student work. 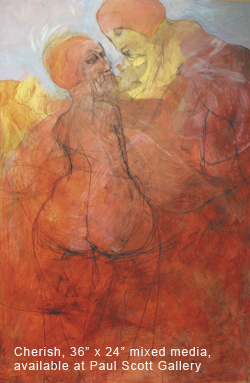 Gloeckler had been considering moving back to the Midwest when her daughter Lizzy graduated from La Grand High School, but she was reunited with childhood and college classmate Bill Marlett in what proved to be a pivotal time in Gloeckler’s life and career. Marlett was one of the founders of the Oregon Natural Desert Association, and as he was still quite involved with the organization, she decided to move to Bend. “Wisconsin is still in my heart,” she explained. “[But now the Midwest] feels tame as compared to the west. The west feels more wild and open.”

She continued her teaching with figure and foundation drawing at Central Oregon Community College and an art and literature distance course for Eastern Oregon University (EOU); currently are both primarily online with the EOU course meeting for an intensive weekend studio. “I like the format, it’s really satisfying to teach [online]. I loved teaching in the classroom and I really enjoy this as well. It’s a real challenge to put all that experience into an online course.” she said.

Gloeckler’s work is exclusive to Paul Scott Gallery in Bend, and has recently been picked-up by their Scottsdale gallery as well. In fact Owner Scott Eubanks purchased the cover piece, Completed Moment. This particular painting is steeped in what makes her artwork unique: a strong emotional tie to the creation of and completion the work.

“The portrait actually is very much a self portrait… I started laying down those really rich oranges and reds and I found just that alone, the color, was so wonderful. From there I just started playing with it and working in some figures and it became more of a portrait,” she explained. “What I really loved in the piece, and what finalized it for me was the reddish pink dot in the corner of the eye. That was sort of dramatic in it’s ending point because it was so solidly complete. That final dot of red was quite significant and very personal.”

Again, the process of painting and creating was essential to the end result. “I figure a lot of things out while I’m working and even discover answers. I don’t [create a piece] with a definite intention, it’s more just working through things and the enjoyment of working, the process itself.”

Relationships stand out as a theme in Gloeckler’s work, especially female relationships of mother and daughter and she finds herself drawn to visual art with a social commentary, the human experience.

As much as she enjoys the physical and emotional aspects of her artwork, the aesthetics of materials and surface are equally important. “l look at my pieces as objects, as a whole…ideally, they could be handled…and I wish for the evolution/history of the piece to be felt.

“This may have come from my family upbringing…..my father’s constant interaction with wood (wood engraving/woodcut) in a very direct hands-on relationship with a material. My mother’s spinning our huge collie’s hair into thread, then weaving. Baskets of naturally dyed wool filled our home. My mother made almost all my clothing, her hand was felt when I wore those clothes.”

“Creating art is cathartic for Terry. She sets out the narrative but you can find your own stories too,” commented Paul Scott Gallery Director Kim Matthews. “Terry is a true artist…she is very emotionally driven in her work. It’s the subconscious talking, so when you buy a piece of her work you take home a piece of Terry’s passion and story.”