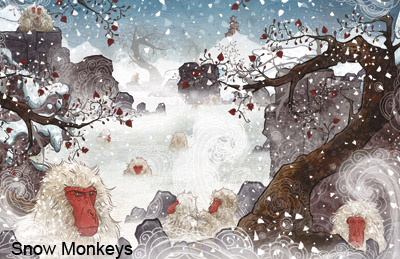 It all starts with a story. An epic snowboarding season on Mt. Bachelor turns into Snow Monkeys, a tale of a girl and her dog turns into The Collectors and a favorite Christmas movie and memories of being bundled up and unable to move turns into Randy. Each illustration Taylor Rose begins already has a detailed story behind it, and the results are whimsical forays into the playfulness of nature and an invitation to the viewer to create their own story. 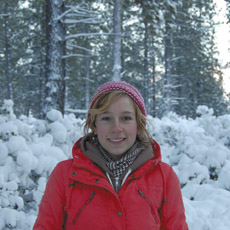 Illustrator Taylor Rose moved to Bend late last year with her boyfriend, Tim Jones, after both graduated from art school. Jones is an artist and illustrator as well, but works with a slightly different subject matter, “He likes the horror genre. It’s funny to see our studio, there are foxes and puppies and then a zombie or monster,” Rose said with a laugh.

“We didn’t know anyone in Oregon or Bend, and that’s how we wanted it,” she said. “We wanted something new; we came down McKenzie Pass and that alone blew me away. I’m a pretty avid snowboarder, and seeing the Cascades was exciting to me. There is something really special about Bend. The people and every scene is inspiring.”

Rose taps into the child-like wonder of her upbringing in a small New Hampshire town when she places pen to paper; exploring the forest, mountains and beaches instilled a creative spirit that pays homage to nature, adventures and animals, and her family was pivotal in nurturing that passion from the very beginning when she used to sell them her early art for a nickel or dime.

“I have been drawing since I was about two with crayons and pencils, and it continued through middle school and high school when I decided to pursue art in college,” she explained. “It was in college that I really found my style and thought, ‘This is it, this is what I want to do and have to do.’”

Her mediums of pen, ink and watercolor took on a deeper meaning once she took a class on children’s books. Discovering the art of storytelling, she knew in each piece she created she wanted there to be a story. In fact, it needed to lead the creation. Many of her illustrations start with short stories she has written herself or inspirations from childhood cartoons. “Each illustration begins with my imagination, which thrives in being surrounded by nature, wildlife, cartoons and comics,” she explained.

In addition to watching a lot of cartoons, she looks to other creatives like digital artist Brett Bean and early 20th century watercolorist Edmund Dulac for insight. “Dulac is one of the first people to tell children’s stories through art, it’s pretty inspirational. Bean does a lot of concept work on animation and cartoons and I love everything that Laika does (an animation studio that produced recent movies like ParaNorman).

“My ultimate goal as an artist is to be involved in cartoons, animation, film or anything like that,” she said. “I think that’s why I have that story interest. Ideally I want [my illustrations] to be a story; a moving picture.” Rose plans to teach herself how to learn digital animation, primarily through online tutorials. For her first animated feature she has plans to turn her senior project in art school, a book she wrote and illustrated called The Most Beautiful Beard, into an animated story.

Rose starts every work of art with the story, pen, ink and watercolor before transferring the image to the digital realm. She makes high resolution scans of her own watercolor marks and splatters and creates digital paint brushes to further work on the image. “It’s really watercolor on top of watercolor” she said. “I think people get a little turned off by the word digital in the art world, but there is so much people are doing with it these days. It’s hard to just ignore how incredible it can be as a tool. 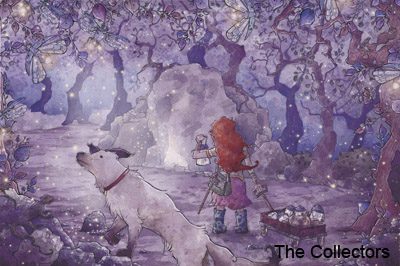 “Photoshop brushes are a digital version of a stroke; they are digital versions of my own painting. That is what gets overlaid over the original pen and ink and watercolor,” she explained. “It’s not overwhelmingly digital…. I never want my work to be 100 percent computer based or digital, it will always have pen and ink and watercolor in that initial process, and then I use digital medium to bring it out.”

Rose will spend between 30 – 80 hours on an illustration depending on how much detail she includes. “I love when people double take on a piece and then get closer and realize there is a lot in there. If I have a show I will try to not let people know I’m the artist right away because I love to just see their genuine reaction to the piece,” she commented. “I don’t want to influence the viewer too much so they can create their own story, I keep my own personal attachment to the piece.”

While her primary medium is pen, ink and watercolor, she took up acrylic paints to work in a much larger format than usual for a piece for the Tin Pan Alley Art Collection; Octopus is a larger rendition of an illustration she has by the same name. It can be seen across from Lone Pine Coffee and Tin Pan Theater.

“I really enjoyed it, working that large and in a different format. Most of my work is really detailed, but working big was a great challenge for me… I’ve always wanted to make that octopus huge, so I just went for it.”
Rose freelances full-time as an artist and illustrator, and even though some months might be leaner than others, wouldn’t trade the luxury of making art for a living for a padded paycheck. In addition to her own personal projects she takes commissions, including family portraits.

Rose has had an ongoing exhibits at The Loft and Hawthorn Healing Center; she will participate in Craft-O in the Old Ironworks District on December 14-15. http://taylorrosemakesart.com, tayrosec@gmail.com