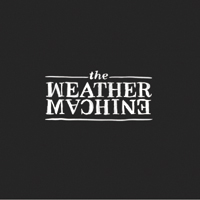 New Portland band, The Weather Machine, has released a fantastic first self-titled album. Sisters native Slater Smith was instrumental in the group’s formation, and the result is a melodic album (evocative of Josh Ritter, The Tallest Man on Earth and Gregory Alan Isakov) anchored by Slater’s seductive vocals.

Slater attributes his singing and songwriting abilities to the popular and award-winning Americana Project, “I wouldn’t be playing music if it wasn’t for the Americana Project,” he remarked. The highly successful program was developed to inspire the creativity of Sisters’ youth, and to demonstrate the cultural and historical significance of American roots music and cultural expression. Entering the program as a sophomore, he began playing the guitar and penning songs. Tanner also participated in the Americana Project and was heavily involved in the Sisters jazz program.

The Weather Machine is the first album produced in Robson’s Pacific City studio, Kiwanda Sound Recordings. Together with friend and partner Andrew Russell, the studio has succeeded in producing a polished and cohesive first production.
Many of the tracks can stand alone as strong representations of the group’s indie sound and song writing abilities, but listening to the album as a whole, the stories unfolds.

Three tracks, Act I – III are the strongest examples of Slater’s songwriting ability in a poetic story rooted deeply in the folk music tradition. Act I Skeleton Jack, Act II Chorus and Act III Alexei Mikhail is cautionary tale of sin, revenge and a grand bargain with the devil.

Nature and a sense of place are strong themes throughout the album and in some of my favorite tracks, Galaxies! and Over All the Land.

The Weather Machine has a number of shows scheduled in Portland over the next few months, and if we are lucky, they will return to Central Oregon again soon (their CD Release party was at The Belfry in Sisters).