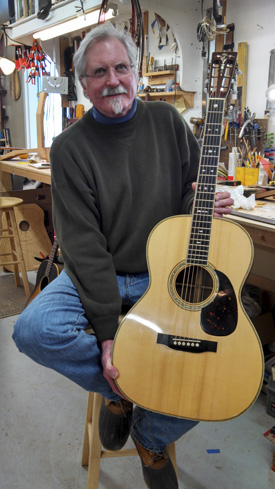 Strumming along under the radar at its new downtown Sisters headquarters, Thompson Guitars is hand-building musical masterpieces the good old-fashioned way…one at a time.

Their artisan-crafted, sterling standard acoustic guitars are prized by serious collectors and discriminating musicians around the world, with a playability and tone unmatched in the industry.

“We moved in here next to The Belfry in October from our previous office spot in the Five Pine Campus,” said Thompson.

“It’s been a little more work getting the building set up but the location is great and it’s going to have a nice showroom. At 2,048 square feet, it’s also quite a bit larger. The spray booth is being delivered in the next several days and we still have a few more guitars to finish in my old shop in Bend.”

Thompson chose the location not only because of its central downtown address but also its close proximity to The Belfry, a popular local performance center and music venue. Belfry owner Angeline Rhett worked closely with Thompson to help ease their transition and plan their big grand opening later this month.

Preston Thompson Guitars are based on the original designs from the golden age of steel-string guitars, specifically from the Depression era, when a sort of  “perfect storm” of design, materials and craftsmanship converged.

“That was the real heyday,” mused Thompson. “These were the iconic guitars that serious collectors and musicians sought out and there weren’t that many made. The survivors that are still around are priced in the stratosphere, anywhere from $30,000 to well over $200,000 depending on the make, model and year.”

“We’ve just obtained some rare rosewood that was cut in 1936 and while in transit to Denmark, sunk with the ship and recently recovered,” he said. “You hear about these stories but seldom do they come to fruition. It’s absolutely exact, period-correct material so getting that desirable wood is remarkable.”

Talking with Thompson is like speaking with a living encyclopedia of guitar history and he prides himself on not only the exacting production process, but the guitar’s living legacy and rich history.

Thompson has created guitars for many notable musicians over the past four decades and his reputation has solidified in the hallowed realms of music’s selective inner circles.

“Sound is number one,” he explained. “They’re all built with the same care and craftsmanship. They look beautiful but they have to be functional. It’s really the particular design and the complexity of the instrument that changes the price.”

Discovered by bluegrass virtuoso Charles Sawtelle and Peter Rowan in the ‘80s, Thompson has built a following for handmade, vintage guitars based closely on the measurements and sound quality of the early Martin 18, 28, 42 and 45 guitars. One of his models, a rosewood Dreadnought 42 made for Sawtelle will be featured in the current issue of Acoustic Magazine.

He got his start building guitars under Charles Fox at the School of the Guitar Research & Design Center in Vermont, the original school for guitar makers in North America. During the ‘70s, he honed his guitar-making skills at the legendary Randy Wood’s Old Time Pickin’ Parlor, the center of Nashville’s bluegrass jam scene.

Setting up in Sisters, Thompson now comfortably plies his trade as a master luthier in the shadows of the Three Sisters Peaks, inspired by the creative community and natural beauty of the region. He currently has five employees working with him, creating some vital, woodworking jobs in this musical community.

In the 1980s, his custom acoustic guitars attracted the attention of the top flatpicking and fingerstyle guitarists in the world when one of his instruments was selected as the grand prize by the winner of the National Flatpicking Championships in Winfield, Kansas. Today, these fine instruments are available direct and through select dealers including Cotton Music in Nashville, Tennessee and Charlie’s Guitar Shop in Dallas, Texas.

“For me, it’s very challenging from so many standpoints: the art, the craftsmanship and the people we get to work with make it a great pursuit. The guitar is the number one instrument in the world and to be part of that tradition and making some exquisite instruments that bring so much joy to not only the player but listeners too is where our passion comes from. It really is fun.”

Thompson Guitars will hold a grand opening at their new shop and showroom on Friday, January 17 from 5-8pm with workshops, demos and a bluegrass concert at The Belfry Saturday.