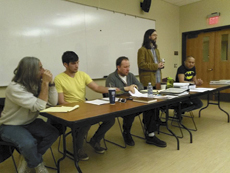 This summer, director David DaCosta’s Thoroughly Modern Productions will tackle one of the great pieces of American literature in their micro-budget feature adaptation of Stephen Crane’s 1895 classic, Red Badge of Courage.

The project is currently in pre-production, aligning schedules and scouting area locations for the start of filming later this year.

DaCosta can frequently be seen in productions at 2nd Street Theater in Bend as an actor, producer and director. Originally from Massachusetts, he moved to Bend back in 2011, when he hooked up with artistic partners Neil Costello and Gary Fulkerson.

“It’s a feature-length film, and the script comes in at 87 pages so by all standards it’s an actual movie,” DaCosta said. “This goes back 20 years as an unrealized dream of mine, something I’ve always wanted to do. Originally I tried to adapt this into a stage version after graduating from college, but everything about it speaks that it’s a film. It took moving to Central Oregon to get it going.

“When I relocated here I was taken by the landscape of Central Oregon and realized it could be filmed here, with the open landscape and rolling fields and rocky outposts. When I traveled over the passes into Eugene I saw that the green valleys were just like the places in Western Virginia and the Carolinas.”

Crane’s book is based on the Battle of Chancellorsville, but it’s never mentioned specifically, so there’s the ability to tell this story anywhere, regardless of the locale.

“What’s important about the story is the psychological journey this individual takes and how this is everyman’s journey. We have to demonstrate the ultimate form of courage in battle, when death is imminent but we all must face battles in life where we must demonstrate courage.”

For DaCosta it comes down to a maturity process, in this case for a young man in the poignant grip of war. Henry, the pivotal character, goes through a journey of self-centeredness to one of extreme self-sacrifice.

“Everything in my life has been steered to this moment. My love of Civil War history and trips to Gettysburg when I was six or seven years old, my reverence for the period, the spirit of the soldier and the grandness of what was sacrificed on a personal and moral level.”

His love of old things and military history made this project a perfect fit for his creative sensibilities.

“I went to school at the Virginia Military Institute with its old traditions and it has directly influenced everything. I have an accumulation of materials from over the years. Six months ago I got together with Gary and we got that material out and pulled the book dialog and incorporated it into the first draft of a script. Then we started to conceptualize the film but didn’t want to follow the linear story that the book tells. I felt we could discover a better convention to make the story more compelling.”

DaCosta auditioned everyone back in February and has chosen his principal characters already, recruiting all local talent.

“It’s a mixture of people I’ve worked with and haven’t worked with,” he said. “The lead role of Henry Fleming is a kid named Neal London. The John Huston film is very much from his point of view I want the audience to be Henry. It really is this core group of seven soldiers that is the main character of the film.”

To aid in the production, DaCosta has established a relationship with the Cascade Civil War Society, a small reenactment group based out of Klamath Falls.

“They primarily run skirmish action and travel over to California and join up to the larger groups for bigger staged events. The battles in the story are mostly skirmish action so that works perfectly for us. Our plan is to attend the event that the bigger group, the Northwest Civil War Council, is holding in May in Camp Sherman. We’ll take some stock footage we need to marry along with our story, and they’ll help choreograph some of our fight scenes for the movie. All these groups are going back East this year for the big 150th Anniversary of Gettysburg.”

During this pre-production period ending August 1, the crew will be getting their funding into place to start filming this September through November.

“I think we’re at a precipice here and it’s still touch and go,” he said. “We have a lot of money yet to raise but I feel confident we’ll get it done. I’ve always kept it alive over the years and trusted that it will happen. It’s all coming together now and I’m really excited. This is a local production and under $150,000. We’re building up steam. It’s a big family and it’s ready to be bigger.”

DaCosta is in the process of creating a website for the film and fundraising purposes. Indiegogo will be the fundraising site via Thoroughly Modern Productions or on Facebook at Red Badge of Courage Bend. 541-678-0313.